Enchanted Rock is a enormous pink granite (affectionately known as Texas Pink Granite) batholith located 15 miles north of Fredericksburg, Texas. The rock received its name from the Tonkawa Indians who believed they could see ghost fires near the summit after nightfall. The Tonkawa Indians also reported strange creaking and groaning coming from the rock at night. We now know these sounds are from the rock heating during the day and rapidly cooling at night. The parks website explains how “a conquistador captured by the Tonkawa escaped by losing himself in the rock area, giving rise to an Indian legend of a ‘pale man swallowed by a rock and reborn as one of their own.’ The Indians believed he wove enchantments on the area, but he explained that the rock wove the spells. ‘When I was swallowed by the rock, I joined the many spirits who enchant this place.’” 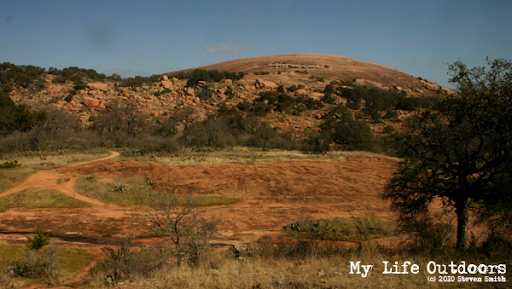 Enchanted Rock as viewed from the summit trailhead

I had visited the park once before in my early teens and have fond memories of that time. Since I was going to be in the general vicinity I decided a trip to Enchanted Rock had to be in order. I had budgeted most of the day for hiking and playing in the park but didn’t really have a set plan on what to do or where to go in the park. I knew I had to take the path to the summit first thing, but after that, I decided to go see whatever caught my eye. 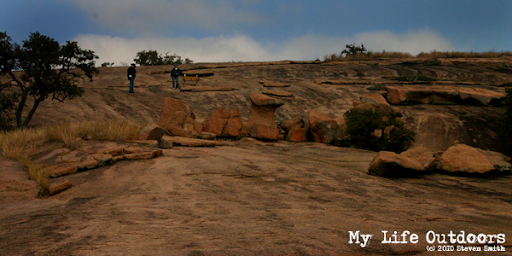 The path to the Summit Trail and Echo Canyon Trail 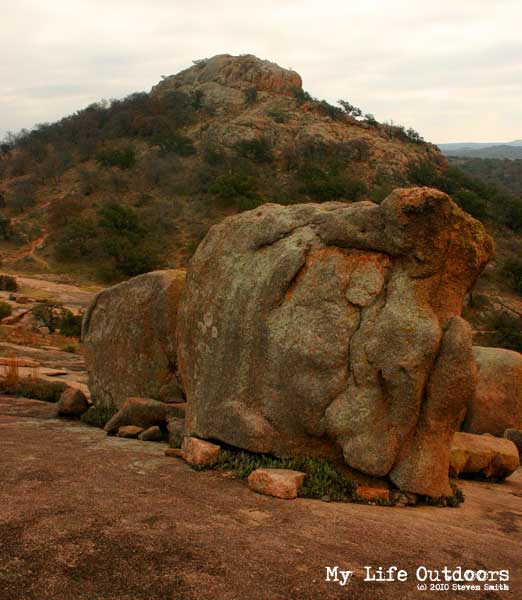 Hiking to the summit you gain just under 500 feet of elevation in less than 6/10 of a mile. It is a fast, steep climb with rewarding views as soon as you start on the trail. From a distance Enchanted rock looks like a gentle dome. Don’t let it fool you… it is quite a workout. Take your time and plenty of water.

Before I had even reached the top I started to envy Turkey peak to the southeast. Eager to head to Turkey Peak I missed many of the wonderful things the wide summit has to offer. I spent a few minutes on top taking in the views and then immediately started to descend the southeast face toward the base of turkey peak. The southeast side of enchanted rock was decidedly much steeper then the summit trail and I struggled to keep myself upright as my boots began to slip. Had there been any moisture present at all I would have found myself sliding down the rock face.

Enchanted Rock from five miles away

Enchanted Rock from two miles away 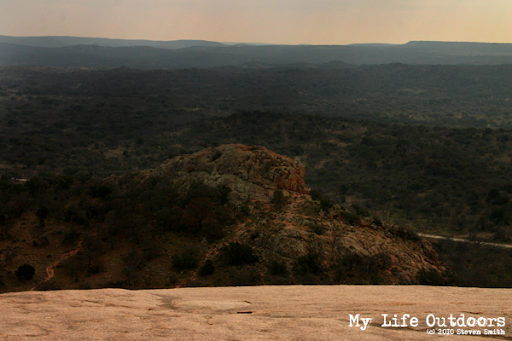 Looking down on Turkey Peak from the Summit of Enchanted Rock

Once at the base of Turkey peak I began to climb to the top, backtracking many times trying to find the best way to the top. There was no obvious trail and more than once I ran into a solid wall of rock. By this time the sky had become overcast and the wind began to pick up quite a bit. I took in the views of Enchanted Rock and the park headquarters below. I then ducked down below some of the rocks to block the high winds and opened my pack to enjoy my lunch. Having brought along a turkey sandwich and I could think of no better place to enjoy it then on Turkey Peak. 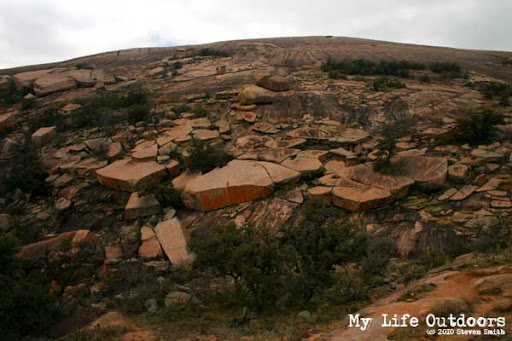 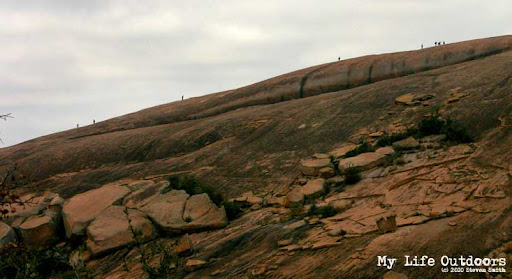 From atop Turkey Peak hikers can be seen heading up the Summit Tail. This is my best example of scale. You really don’t realize how big the Enchanted Rock is. How ever big it looks in these pictures…it is much bigger.

Heading down turkey peak I cut back across the southeast face of Enchanted Rock stopping to play in the large boulders that littered its base. My intention was to head over to Little Rock (enchanted rock’s little sister) but quickly found an obstacle in the form of a large rounded wall of rock jutting up from the side of Enchanted Rock. I tried to go below and above the wall with no luck. Finally I found an area that allowed me to safely scale the side and continue my journey to little rock. 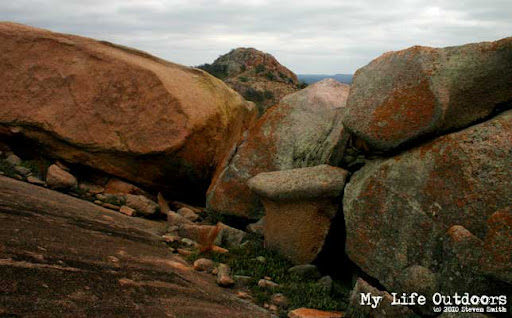 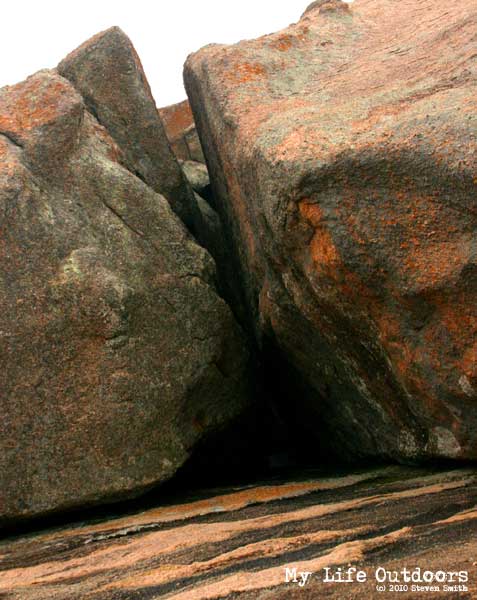 Large boulders on the southeast side. To give an idea of scale I could stand upright inside the triangle shaped hole at the bottom of this picture. 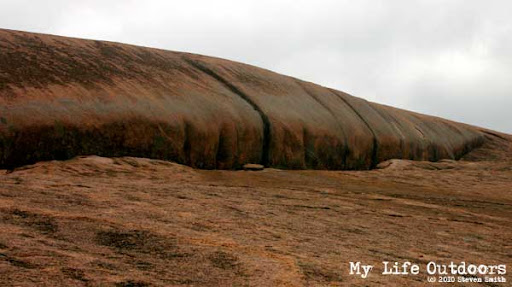 The large rounded wall of rock that stood in my way. The flat vertical side was at least seven to ten feet high 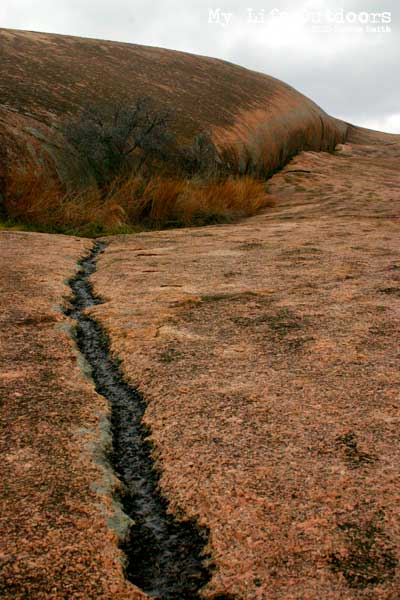 Water’s path coming down from the round rock wall

Joining the Echo Canyon Trail I followed it and then broke away to reach the top of Little Rock. Little Rock’s path to the summit is not quite as steep or hard as the path to Enchanted Rocks but demanding none the less. Wandering around I took in views of Enchanted Rock and started to notice something I had missed. Apparently there is a cave on Enchanted Rocks North side. It’s not so much a cave as a passage under the large boulders that litter that side of the rock. I decided my trip wouldn’t be complete without finding the cave. 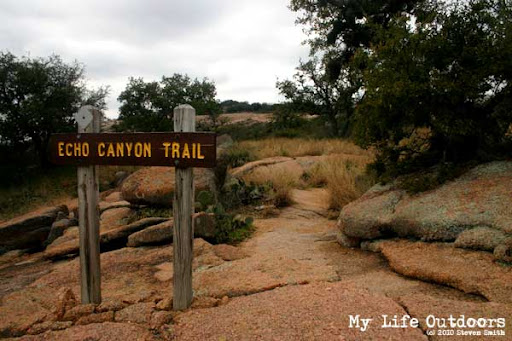 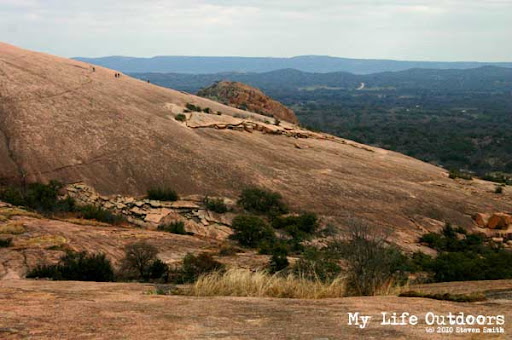 Looking east from the Little Rock summit, more hikers can be seen heading up the summit trail. Turkey Peak is poking up just beyond Enchanted Rock.

Enchanted Rock as viewed from the Little Rock summit

Heading down and then back up I cut across to the north side of Enchanted Rock and began to poke around in and under the large boulders. I ran into two young men who had come prepared with flashlights and intentions to follow the cave to its other opening on the eastern side of the rock. Having not brought a flashlight, I followed the cave as far as I could with the ambient light from the narrow shafts above. It quickly became too dark to see and thus forcing me to turn back. As an alternative I followed the path of the cave up above, scrambling along the large boulders that formed the caves ceiling. Every once and awhile I ran across a deep shaft and even caught the sound of the guys voices and a the light glimmer of their flashlights. Following the chaotic path, often having to turn around at impassable deep shafts, I managed to find the other opening where the two men emerged. We talked for a while about the cave and eventually parted ways. Having made my way have way down the rock I decided to continue that path and scrambled down the remaining distance.
By this time I was quite tired having gone up and back down three different peaks four times and spending a large amount of time in the caves. Reaching the bottom I followed the perimeter loop trail over to Echo Canyon Trail and passed over the canyon one final time heading to my car. 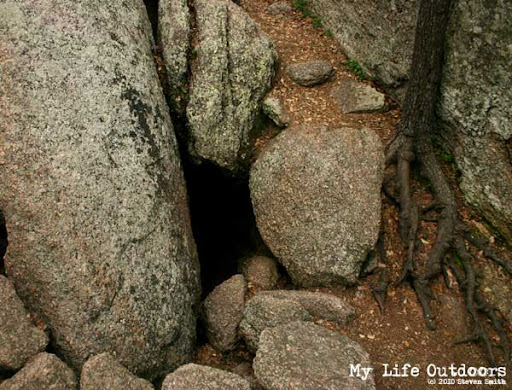 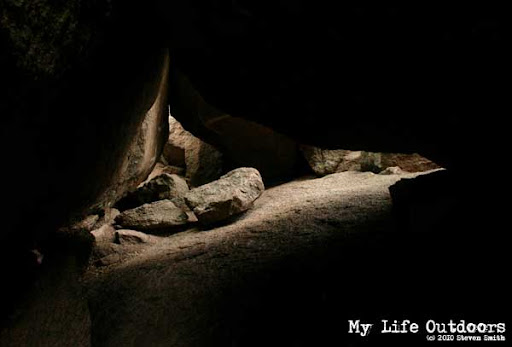 One of the views inside the cave 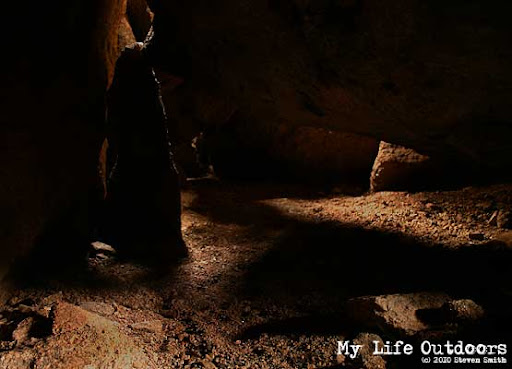 Another view from inside the cave 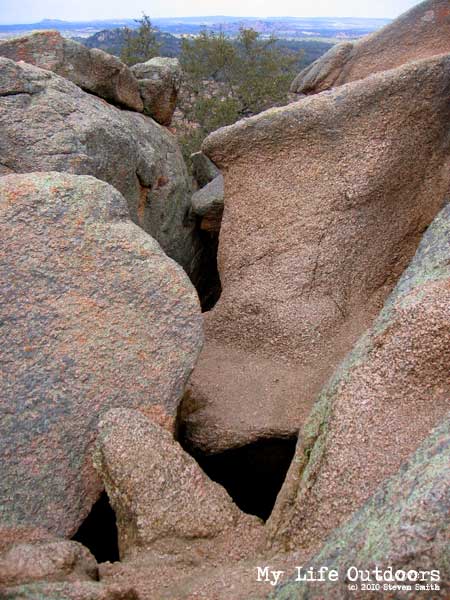 “Following” the “path” above the cave 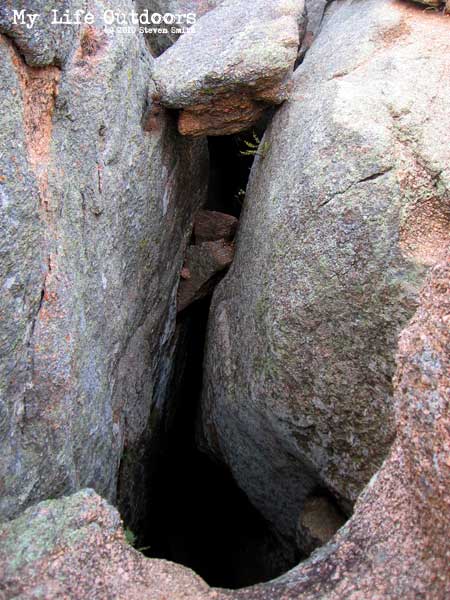 Deep shaft down which I could hear the people and see flashlight inside the cave. This is one of the many shafts that were too big and deep to pass. I had to find another way around. 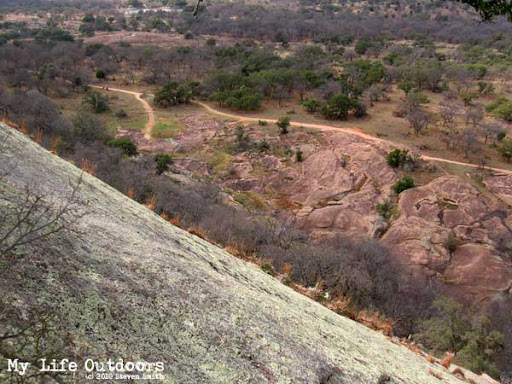 Looking down from among the rocks above the cave. Its a long, steep, way down on this side of enchanted rock.

There is so much to see and do in the park. You can literally play for hours among the many boulders, trails, and cave like passages located in the park. The park offers technical rock climbing all over the park with more than 45 established rock climbing routes. There are two other significant peaks (Freshman Mountain and Buzzards Roost) that I never got to touch. 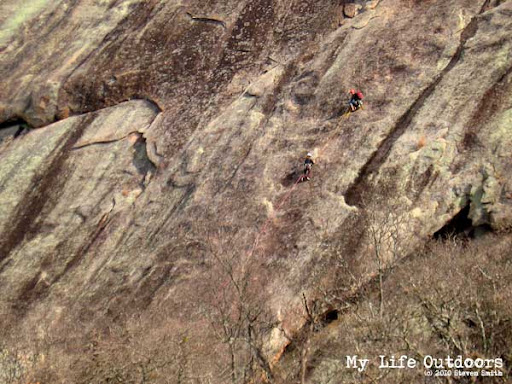 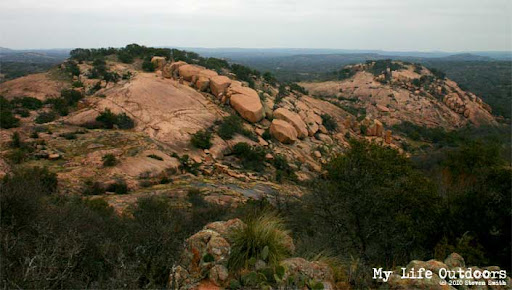 My advice… budget a lot of time, bring a flashlight, and be prepared to wear yourself out. Be sure to check with the park office for information about the cave and rock climbing.