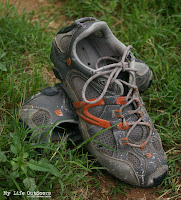 The worst shoe I have ever bought. The North Face Padda “Amphibious running Shoe” is described as ”a must-have for athletes who require a stable shoe for kayaking, or rafting.” Now I enjoy my fair share of kayaking and rafting. And so I bought a pair of Padda shoes to wear mostly as a water shoe…but also considering its “amphibious” nature… a casual tennis shoe.

Well that was a mistake. The North Face Padda does not perform well as a water shoe or a dry shoe. As a water shoe the Padda does not have thick enough soles. Granted most people wear “water socks” that have barley any sole at all. But I didn’t buy a pair of water socks. I bought a pair of $100.00 shoes that are supposed to be a “running shoe.” I don’t know anyone who would dare run in their water socks. So I thought that as a running shoe the sole would help protect my feet against sharp limestone river bottoms. This was a mistake.

Secondly, as a water shoe, the traditional laces come untied when submerged underwater for any amount of time. In Texas…especially in the summer…rivers tend to flow very low. Unfortunately this necessitates a lot of dragging your boat through shallow spots. Even after tying these shoes in a double knot the constant motion of walking in the water would unite the shoe in no-time.

As a dry shoe the Padda’s still fail. The underside “drainage ports” tended to act like a sponge any time I had to step in any type of water. And I’m not talking about rivers or streams…I talking about stepping outside on a wet side walk after a light rain shower. If there is any water on the ground…no matter how little it may be…the Padda’s would soak it up. When wearing these shoes around town I found myself going out of my way to avoid impossibly shallow puddles just so my feet would stay dry.

I don’t know why…maybe I was trying to justify paying $100 for a terrible shoe…but I wore these shoes for close to 2 years. About 6 months ago the shoes began falling apart. One shoe’s “Draining Port” starting tearing until it engulfed a second drainage port creating a huge hole in the bottom of the shoe. Not long after that the side mesh began tearing making the shoes nothing more than a pair of sandals. I finally had to replace them when the one shoe’s sole completely separated from the upper shoe. To me a $100 pair of shoes should last longer than a year and a half. Not even a year and a half because I really only wore the shoes a couple of summers because the shoe is just too cold to wear in the winter. 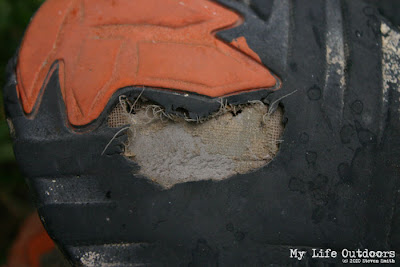 The ever expanding “drainage ports” 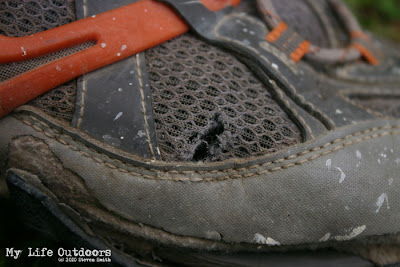 A whole in the upper mesh 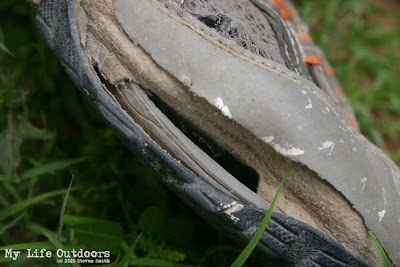 The sole separating from the upper shoe.

I looked today to see if TNF is still making this shoe. I can’t find it on their website which gives me hope that it has been discontinued. But I continue to see the Padda’s in local retail shops and online. Recently while looking for replacement shoes I pointed to a pair of Padda’s on the shelf and told the store owner “This is the worst shoe I have ever bought.” He said “I never buy North Face Shoes…they just don’t last.” And this is in a store that barely sells anything but North Face gear. I can’t help but believe The North Face has resigned itself to live along side Old Navy and The Gap. They aren’t about quality anymore…it’s all about fashion. So if you are considering a pair of Padda’s…Please be forewarned… this shoe is a disaster.