Sunday morning I had the opportunity to hike in Cade’s Cove. I woke up shortly before first light and got dressed for a cold winter hike. I took the short drive from our hotel in Townsend, TN to the entrance of the auto loop in Cade’s Cove. I decided to hike to Abram’s Falls for a number of reasons. One, I always love a good waterfall. It seems no matter how many photos I have of falling water I always want to get one more. Two, it is the shortest day hike available in Cade’s Cove (2.5 miles to the falls and then back out). If I had more time I would have liked to hike to Thunderhead Mountain. But since my time was budgeted Abram’s Falls seemed to be the only choice. 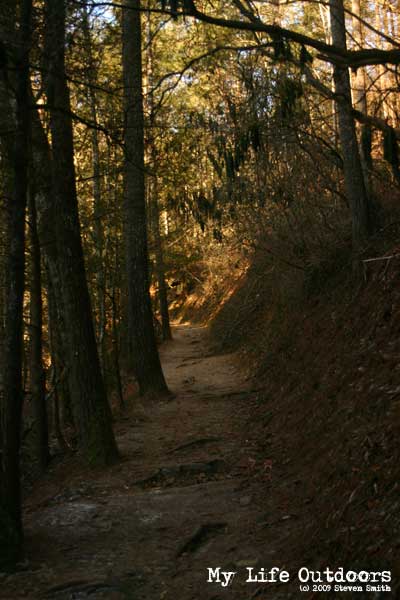 I had hoped to be on the trail as early as possible. I was disappointed when I got to the gate for cades cove and found it to still be locked. The Abram’s falls trailhead is about halfway around the 11 mile Cade’s Cove auto loop. Not only was the gate locked but there were about 10 cars waiting at the gate to take the self guided auto tour. Luckily the ranger was not long in coming to unlock the gate and I made it in the cove by 8:30. Unluckily the person driving the car at the front of the line was unwilling to use the pullouts as he stopped to take in the abundant views available from the loop. The self guided auto tour is something special, and I recommend it to anyone coming to the Smokies. But this morning I was only interested in getting on the trail. I spent the next 20 minutes traveling 5.5 miles to the trailhead. The Great Smoky Mountains National Park is the most popular in the Park System with anywhere between 8-10 million visitors every year. This was in a very slow part of the season, and the frustration of driving the loop to access the trailheads was unbelievable.

When I finally made it to the Trailhead and set out towards the falls the thermometer in the car read 9 degrees Fahrenheit . There was still small amounts of snow on the trail from a storm two nights before. A large number of footprints attested to the popularity of the trail. I, however, was the only one on Abram’s Falls Trial this morning. I immediately crossed Abram’s Creek via the wooden bridge, took a left at the fork in the trail and followed the flow of water in the creek. 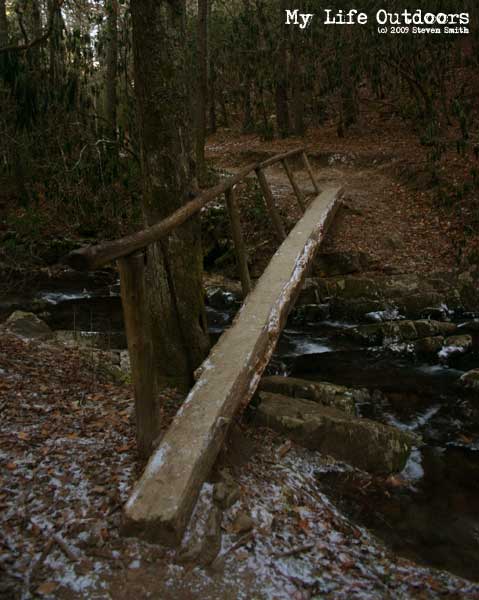 The trail remains mostly flat until you come to the Arbutus Branch tributary. No wide bridge here like the beginning of the trail, but you don’t have to ford the creek either. Cross the split log with handrail over the creek and begin your climb up Arbutus Ridge. Just after one mile of your journey you will reach the highest point on the trail. You can see Abram’s creek slowly meander away from the ridge only to circle back around a mile-round circle in Arbutus Ridge. At this highpoint (and with the foliage gone in winter) you can see where the Creek Leaves and then comes back to the trail. From here you can see your greatest views of the surrounding mountain slopes.

Continue to follow the trail back down the slopes of Arbutus Ridge, crossing a second log bridge over Stony Branch. The trail rises once more before ultimately descending to Wilson Branch which joins Abram’s Creek just below the falls. Cross Wilson Branch, follow the flowing water to Abram’s Creek, and cross back over to view the falls. 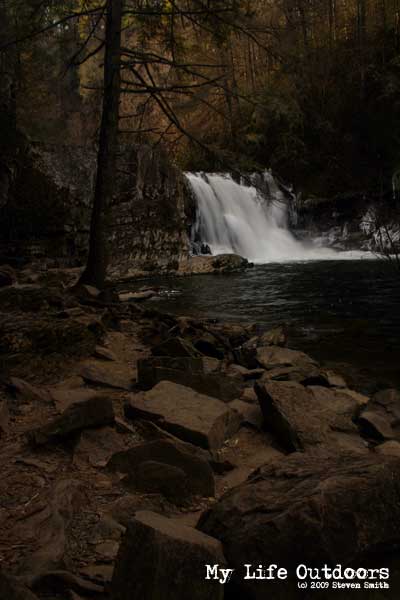 In High water the Abram’s Falls is quite spectacular flowing powerfully into a 100 foot wide pool. Signs near the falls warn of powerful water currents and claim 4 deaths have recently occurred due to people swimming below the falls. With the temperature rising just slightly above 17 degrees there was no temptation for me to take a dip in the pool. But from the view of things I could see how it might tempt hot, tired, hikers in the warm months of summer. I stayed long enough to pray and snap a few pictures among the natural beauty of the area. I could have spent much more time there, but my camera batteries died and it was time to head back.

Despite the trail being one of the more popular in the park, I never saw but one other hiker on the trail. I made it back to my car in less than 45 min. I was relieved to find the auto loop less crowded on the way home. I took in my last views of Cade’s Cove and then descended the mountains to Townsend.