Cherohala Skyway, located in Tennessee and North Carolina, is one of the few nationally recognized scenic highways in the United States. As I mentioned before my wife and I were recently given the pleasure of driving the entire 36 miles. Since we were staying in Tennessee we choose to enter the Skyway from the town of Tellico Plains. We had only driven a single mile on the Skyway before deciding to take the short detour down River Road to see Bald River Falls. 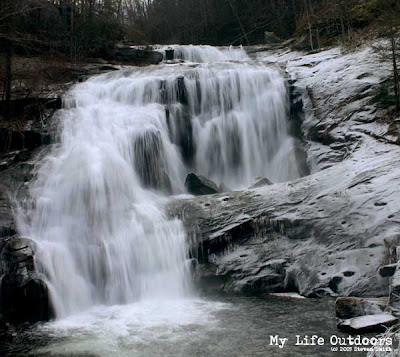 Bald River is a tributary triumphantly flowing into the Tellico River via a 100 foot water fall. River Road crosses over the Bald River just below the falls where the two streams meet. From the bridge you have a wonderful vantage point of the falls and many travelers stop to take pictures. The day we were there it must have been below 20 degrees outside and yet the bridge was crowded with pedestrians taking pictures and watching the falls. We crossed the bridge carefully, trying not to hit any photographers, and parked in the limited parking along River Road.

Bald River Falls is quite spectacular. It is really hard to describe the scale of the falls. Describing it as 100 feet of cascading water really doesn’t give it justice, and the pictures make it look much smaller than it is in real life. The falls blows quite a bit of freezing mist at the bridge making photography and simply walking on the bridge quite difficult. Most of the frost you see on the surrounding rocks is from the mist blowing off the falls. There was no snowfall in the days preceding our visit. There is a short trail located at the far end of the parking area that leads to the top of the falls. We decided not to hike to the top and instead opted to continue on so we could have more time on the Skyway.

After snapping a few pictures we headed down River Road a little further and came across a nameless waterfall. We parked at a nearby Forest Service Campsite and walked down to the waterfall to take some pictures. As we got out of the car a single Kayak was pulling out of the water after running the 20 foot drop. We did not get there in time to photo his run but got to talk to him about it. He said the water was very, very cold, evidenced by the icicle that had formed on his helmet. 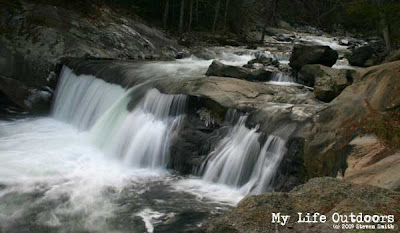 We jumped back in the car and headed back to the Skyway to start our climb to the top. From Tellico Plains you climb 3588 feet to the Tennessee/North Carolina State line were you cross at an elevation of 4,518 feet. Crossing the state line you continue to climb another 865 feet to the highest point (Hooper Bald) at 5,383 feet. All along the way you find many scenic overlooks and pullouts to take in the abundant views. Shortly above elevations of 3,000 feet or more we saw evidence of Freezing Fog and snow covered hills. 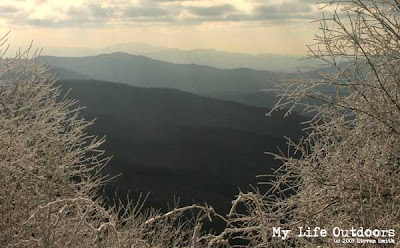 After Hooper Bald you begin your decent into the forests of North Carolina. Descending back to an elevation of 2,460 feet where the Skyway officially ends at Santeetiah Gap. I recommend driving the short distance to Robbinsville to fill up with Gas. There are no other gas stations in the area (that I am aware of) and, in addition to my own gas scare, I had one other person (coming from the NC side) ask me how far to the next gas station. When I told him he was afraid he wouldn’t make it. If you’re thinking 36 miles doesn’t sound that bad realize we drove more than an hour, from our hotel, just to get to the entrance of the Skyway. By the time we got back we had used a whole take of gas on the steep grades and hair pin turns. You shouldn’t have a problem if you fill up in Robbinsville or Tellico Plains (or both). 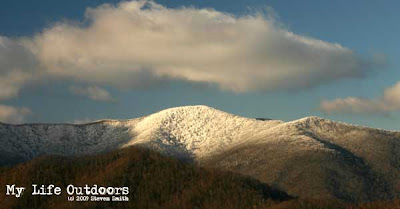