Not long ago I read about a Nevada couple who selected “Shortest Route” on their GPS and unknowingly followed it down an unforgiving forest service road. Unfortunately the couple became stuck and/or lost in the forest. Luckily the couple had prepared a car survival kit and brought enough food and water to last them the tree days they spent trapped in the woods.

This story stuck in my mind as my wife and I recently drove through the remote forest roads of the Cherokee National Forest in the Great Smokey Mountains. The day before I had asked our GPS (whom I have affectionately named “Lola”) to take me to Cade’s Cove. She tried, oh how she tried, regrettably she failed when she lead me up a narrow unpaved mountain road that was blocked with a gate and a sign that read “Dead End.”

I realized just how much I have come to rely on Lola when we came to the end of the Cherohala Skyway and asked her to take us back to our hotel. She informed me that we would need to travel 60 more miles before arriving in Townsend where we were staying. The car told me I had a little more than 100 miles before I ran out of Gas. So to save time I trusted Lola to get us home and decided not to travel out of our way to get Gas. And she would have got us home without a second thought from me if it wasn’t for one poor truck driver who had no business in the narrow winding roads of the Cherokee National Forest.

At the point of no return, that is, when I had made it to a point where I had enough gas to get home, but not enough to make it to the last gas station we passed. I ran into a big rig truck that had managed to get himself stuck, blocking the entire road. He must have tried to back up when he realized he couldn’t make the turn and backed up over the edge of the road. The guardrail saved him from dropping into the lake just below the road. But now he was stuck. There was no way around him, and he could not pull himself out of this predicament. His tires were lodged in the Guardrail in such a way that if he went forward the guardrail was holding him back. If he backed up, he would risk falling further over the edge of the road. 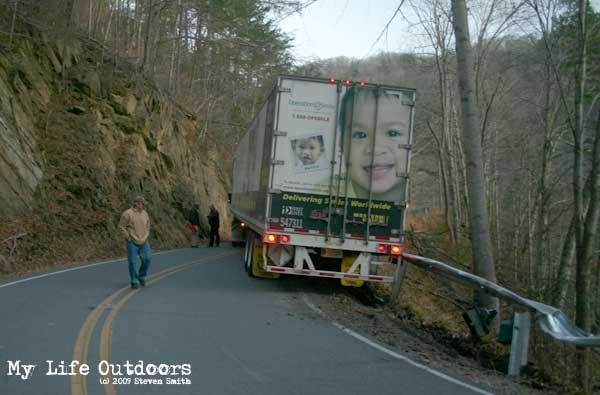 With no other option (he would have been hours getting out of there) I asked Lola for a detour. And she provided one. Up up up we went into the mountains following Lola’s directions. The road became narrower and steeper the higher we climbed. The thoughts of that poor couple and Lola’s misguided directions the day before loomed in my mind as my gas gauge dwindled.

The lost Nevada couple had given me enough warning that I had at least prepared our car with a Survival kit consisting of a couple of sleeping bags, some dried food, and water. I kept thinking if I get to the top of this mountain and there is a gate that says dead end somewhere at the top, we will run out of Gas. But if we do, we can survive until daylight, or until someone finds us (there is no cell service in the Cherokee National Forest).

Fortunately we didn’t have to sleep in the car that night. Lola got us home (detour and all) with about 15 miles of gas to spare. It was a close call, one I thought I was too smart to find myself in. I always fill up when I’m in unknown areas when I get the chance. I broke my rule and relied a little too much on technology and I nearly had to pay the consequences.

If nothing else I hope that someone reading this blog might learn from my and that lost Nevada couple’s mistakes. When driving in unfamiliar remote areas, always fill up when you see a gas station. And more importantly take some time to create a car survival kit. You will never know when you might need it. Here are some links with some good info on how to make one:

49 Things For Your Emergency Car Kit