Yesterday my oldest and I drove down to the Davis Mountains State Park to do some hiking. We wanted to hike in the parks “primitive area” but where told the park had allowed some hunters on the area to bow hunt for Havalinas. So we took the Park Rangers suggestion and followed a number of trails around a five mile ”Skyline” loop of the park. 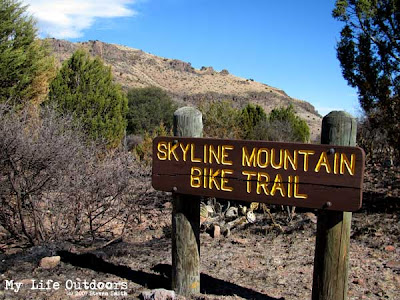 We grabbed a park map and drove down to the Skyline Mountain Bike Trailhead and began heading east. The Trail gradually climbed the hill side eventually linking up with an old dirt road that was originally installed by the CCC. The whole time we were on the Mountain Bike Trail Hwy 118 could be seen. Every time we felt secluded, a passing car would remind us we where not. We followed the Historic CCC road for about 200 yards before breaking off to the south where we reached the ridgeline (or Skyline as the park refers to it). After breaking from the historic roadway the trail system became very confusing. My daughter and I found at least 3 trails (that looked to have been recently maintained) that were not on the map. 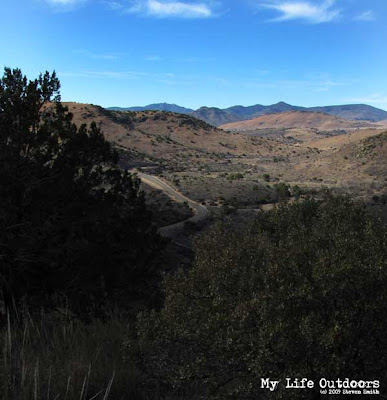 The map itself didn’t seem to portray any of the trail’s actual paths. It just seemed to mark the trail’s general direction. It did not show actual turns in the path or even the correct number of switchbacks the trail took. We eventually decided the map was worthless when trying to figure out how far we had gone or which path to take. 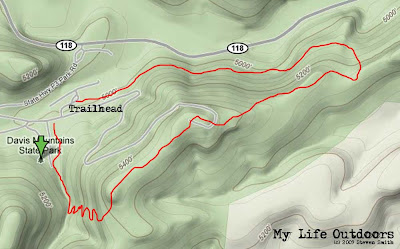 Once we reached the Ridgeline we followed it back west to the parks summit, climbing a total 500 feet (from the trailhead to the summit) to an altitude of 5500 feet. We ate lunch on the top and took time to enjoy the views. The Park Ranger said Mexico could be viewed to the south but we couldn’t tell if we could see it or not.

The view to the South. Can you see Mexico? We couldn’t.

After lunch we followed the trail west along the remainder of the ridgeline, strolling peacefully through the tall grass. Views of the park’s campground and Indian Lodge Hotel could be seen to our right and Fort Davis to our Left. Reaching the Trails western most point we began to descend back into the valley. This was by far the best part of the trail. We could no longer see or hear hwy 118. A cool mountain breeze gently rustled the tall grass. The views of the tall 8,000 foot peaks could be seen to the West. 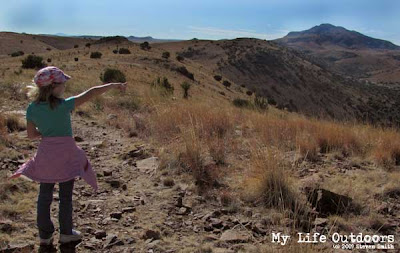 With an 8 year old we spent just under 4 hours (with a stop for lunch) to complete the 5 mile loop. The trail was moderately difficult with an easy gradual climb over several miles when starting on the Bike Trail. If you start on the other end (by the amphitheater) you will climb nearly all 500 feet in the first mile. 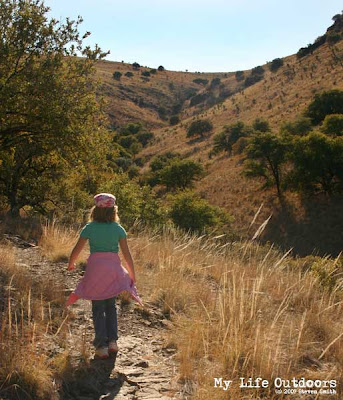 The path was well maintained (some areas better than others) but poorly marked with a mostly gravel surface. There was hardly any shade on the trail at all. With temperatures barely reaching 65 the sun was a welcome variable. We only saw one other person on the trail the entire time. But as I mentioned before, the noise from hwy 118 keeps you from feeling secluded for most of the hike. All and all we had a great time. When we got home my daughter asked when we would be going back. That has to count for something! 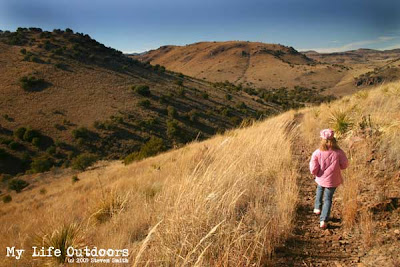