Some time ago the family and I went down to Big Bend National Park for my daughter’s birthday. We had many adventures while we were there (all of which I plan to share with you someday), but our most anticipated adventure was a paddle trip into Santa Elena Canyon. Something I have always wanted to do was paddle the Rio Grande so when we made plans for Big Bend I knew a paddle trip had to be on the itinerary. With my daughter present I knew we had to keep it safe and simple. I checked the flow gages for the Rio Grande and discovered there was too little water for most of the trips available in the Big Bend region. I checked several guides and called around and eventually decided we would paddle up river into Santa Elena Canyon to see Fern Canyon. According to everyone I spoke to that would be one of the only paddle trips with enough water to keep it enjoyable. Not only that, but Fern Canyon was supposed to be a beautiful side canyon two miles upstream with “ferns growing where water is seeping out of the canyon walls.” 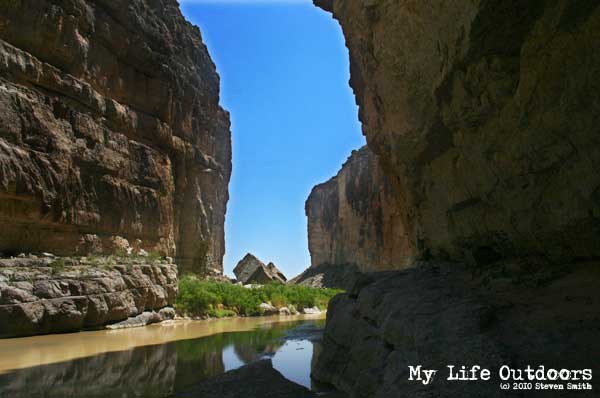 Santa Elena viewed from the inside looking down stream.

I’m sad to say we never made it to Fern Canyon. Our first mistake was renting an inflatable kayak. Those things are worthless. We always take our Dagger and Perception with us and prefer them over renting, but on this particular trip my wife’s teenage brother was with us, so we needed a third kayak. Nobody in the area rents anything but inflatable’s, which I am sure are great, but not when you are paddling upstream. The thing would not track at all and my brother in law was having the hardest time keeping up with the rest of us. I eventually ended up giving my kayak to my wife so she could paddle with my daughter. My brother in law then got my wife’s perception, and I ended up with the inflatable. It was hard work paddling the inflatable, but I thought, at least now we could continue upstream. I really wanted to see Fern Canyon. 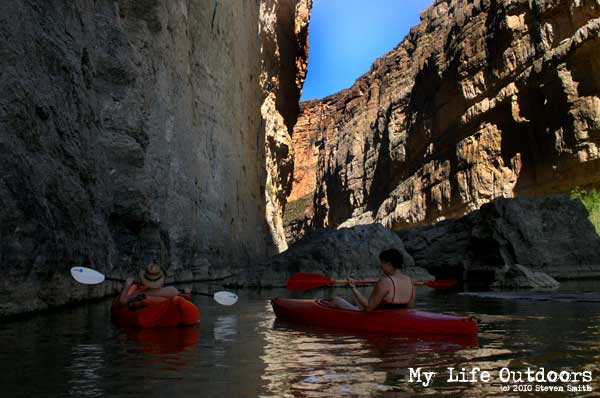 My family and that dreaded inflatable kayak.

It wasn’t long before the water became too shallow to continue. We tried to get out and drag the boats for awhile but the soft muddy river bottom made this extremely difficult. No one was having any fun and it was evident. I eventually gave in to my family’s constant requests to turn back after one short mile. It seemed I was the only one that wanted to see Fern Canyon bad enough to continue. Everyone was relieved when I finally gave permission to turn back. In their defense…it was a pretty miserable trip. 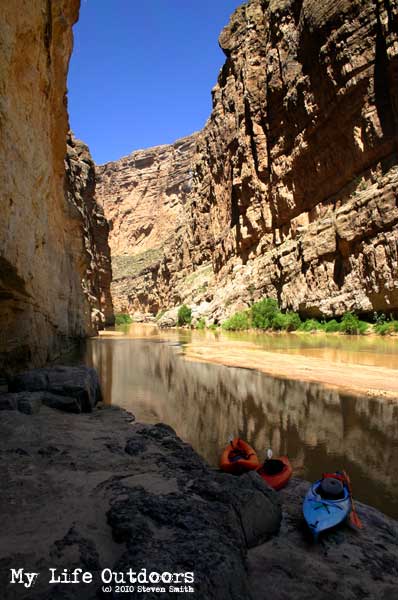 We pulled off to the side to enjoy some lunch.

The NPS list the upstream paddle to Fern Canyon as “quite leisurely.,, If the water level is low” adding “you do not have to fight the current much going upstream.” This is a lie If you plan to rent inflatable’s from area outfitters. The water was as low as it gets on our trip and the inflatable couldn’t handle even the slightest bit of current. Keep this in mind and rent somewhere else and bring the boats in yourself. Also be prepared to drag through the mud if the water level is low. 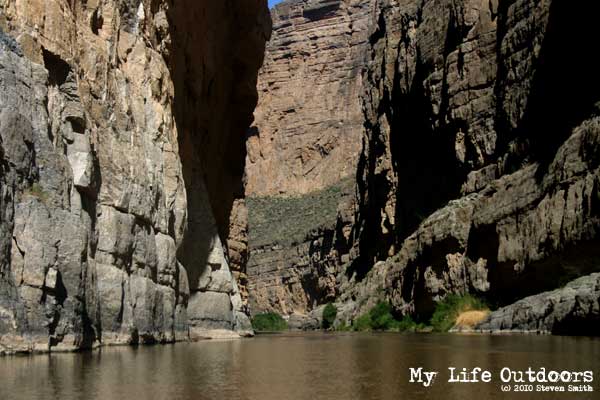 At times it looked like the river just ended with a solid wall of rock.

I hope…no, I will go back some day and do a proper trip down the Rio Grande. There is so much river down there. I may never get to do it all. But this last trip didn’t satisfy my desire to paddle the Rio Grande. So there will be a trip in the future.

Resources:
I use both the Map and Book featured below when planning my trips to Big Bend. I highly remomend them to anyone wishing to hike there. Buy them through these links and help support MyLifeOutdoors.