I will be leaving soon for a much anticipated trip to summit county Colorado. I am taking a group of families to ski at Ski Cooper outside of Leadville Colorado. Ski Cooper is a small resort in the San Isabel National Forest. Taking up only 400 acres and consisting of only 26 runs and 5 lifts (2 of which are beginner lifts) Ski Cooper is not your average resort. But it is not below average either. To be honest, I hesitate to tell you about it at all. You see I grew up skiing at Ski Cooper back when barely anyone knew it existed. It has always been a great, friendly, uncrowned, and affordable mountain for me and my family. It’s our little secret mountain where we can go at high season and still avoid the crowds. 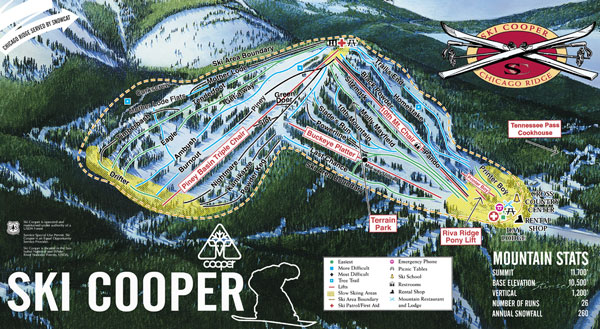 Fortunately for Ski Cooper, but unfortunately for us, all that is changing. Every year now it seems more and more people are discovering Ski Cooper, and every year the crowd grows. Its saving grace is the fact that most turn their noses up at its size. But don’t let its size fool you. Ski Cooper is my favorite place to ski in the entire world. Known for its abundant real snow, rich history, and prime location, It’s the kind of place that grows on you. A place you come to know, love, and dream about when you aren’t there.

It all started back in world war II. In 1942, near the Pando, CO railroad stop, Camp Hale was built as the training site for the 10th Mountain Division’s ski troopers. The Army picked this site for a number of reasons including: nearby rail transportation, rugged mountainous terrain, and an average 250 inch annual snowfall that assured a six-month ski training season at nearby Ski Cooper.

Following the end of the war, Ski Cooper was opened to the public and continues to operate today. I started skiing at Ski Cooper back in 1986 and have gone back many years since. Its been three years now since the last time I saw this old friend. I can hardly wait to be there again.

But don’t tell anyone I told you.

2 thoughts on “The Little Mountain That Could.”