Saturday morning of our trip to Palo Duro my family and I set out to hike the parks most popular trail to the lighthouse. Palo Duro is the second largest canyon in the United States and the Lighthouse is her signature formation. Every year thousands of people set out to hike the 3 miles (6 round trip) to the base of the formation and this Saturday was no different

.
We set out about 9 a.m. The morning was cool and we all had our jackets on. When we pulled up to the trailhead the parking area was packed. We took one of the last spots available and wondered if we should have started out earlier. 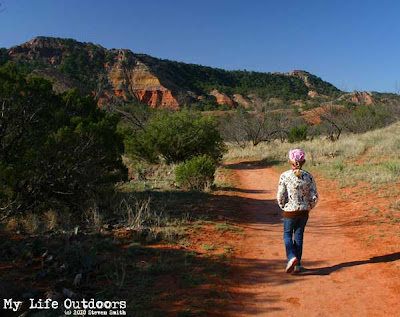 It was cool when we set out on the trail and we all had our jackets on.

A sign at the trail entrance warned of the heat danger and advised one gallon of water per person (and pet). I couldn’t help but notice the contradiction between the sign and the parks trail map which advised two liters per person. We had something in-between and felt confident we had enough. 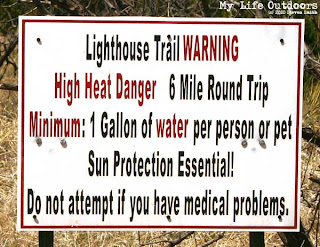 A largely ignored warning sign at the beginning of the trail.

Heading past the base of Capital peak we could already tell just how crowded it was going to be when two large boy scout groups passed us. Once again we found more mountain bikers on the trail then hikers and were nearly run over a number of times when a few came barreling around blind corners. To our amazement most of the people we encountered on the trail had no more than 20 ounces of water with them. Even the boy scout groups seemed ironically unprepared for such a long desert hike. We passed one older gentleman with an older dog in tow (again with less than 20 ounces of water between the two of them). We overheard a local warning them that he had seen dogs die on this trail before graciously offering the dog his own water. 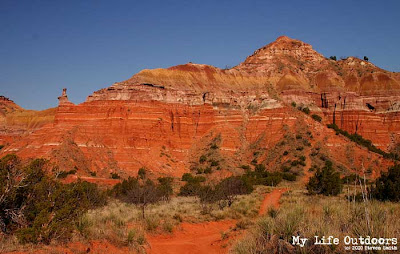 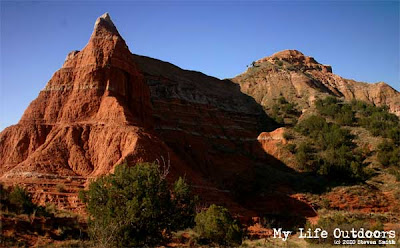 The backside of Capital Peak

About half way in we caught our first glimpse of the Lighthouse formation. It had already begun to warm up but the breeze was still keeping us cool. We were very thankful for the trail markers that listed our mileage every 10th of a mile. 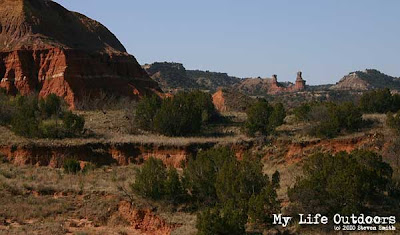 Our first glimpse of the Lighthouse

The Lighthouse and Castle Peak on the left 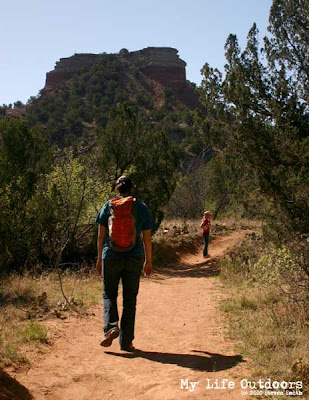 At 2.8 miles you reach the base of the Lighthouse where there is a picnic table and a bike rack. Up until this point the trail is relatively flat with the next 2/10 of a mile being the steepest and hardest. As we were going up we were relieved to find the boy scouts coming down hoping we might have the top to ourselves. The scouts were slipping and sliding on the loose steep sand rising concern for me coming down with our 5 month old on my back. 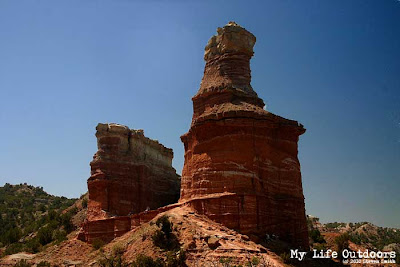 Just below the Lighthouse

Once on top we were not alone but it was not as crowded as we had expected either. We ate lunch in the shade of the canyon walls before our oldest and I headed up to the rim of the canyon. The view from the rim is very spectacular but doesn’t transfer well to film. We spent a little less than an hour on top before beginning our three mile hike back to the car. 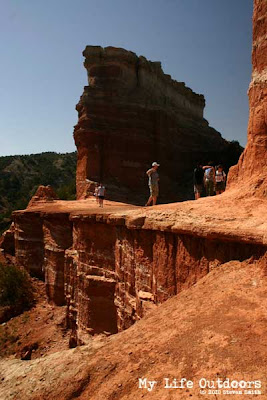 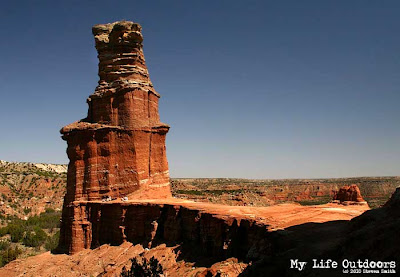 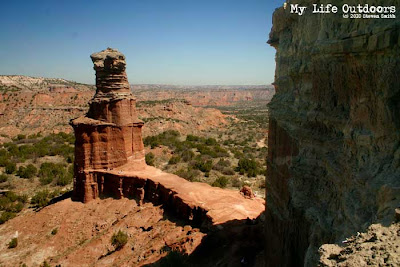 Looking down on the lighthouse near the canyon rim

On top of the rim it still felt somewhat cool but that quickly changed when we reached the canyon floor. The last mile of the hike back we were all pretty tired and the heat was really beginning to wear on us. A half mile before the end we finished off our water supply and thought once more about all the poor unprepared people we passed coming out. Once we reached the trail head I noticed a thermometer that read 110 degrees Fahrenheit. It was hot indeed. We got back in the jeep thankful for air conditioning.

One of the many views from the lighthouse trail 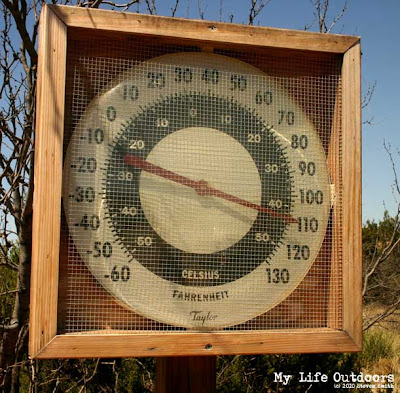 It was very hot when we got off the trail.