Well it has been a long busy summer for me which has had an effect on my blogging. I have had many adventures over the past 3 months and I am looking forward to blogging about them in the coming weeks.

Back in early July a friend and I attempted to summit Hermits Peak (10,212 feet). Hermits peak is at the extreme southern end of the Rockies in the Sangre de Cristo mountains. The peak rises 3700 ft above the town of Las Vegas in northern New Mexico. 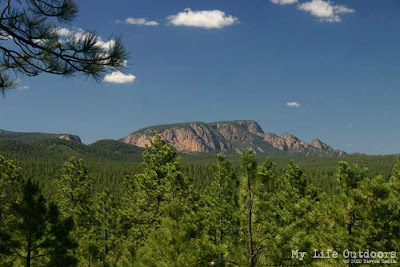 Hermits as viewed from Camp Blue Haven. Some people say it looks like a human face profile.

I say “attempted” because we never actually made it to the summit. We were both teaching at nearby Camp Blue Haven and had the “afternoon” off. Hermits is the highest peak in the area and a lot of the camp staff (as well as campers) go to summit while at camp. Due to a number of forest fires in the area the quickest route down Forest Road 18 was gated and locked. We had to drive out of our way through the town of Las Vegas, NM adding about an hour’s drive on a tightly scheduled trip.

As soon as we pulled up to the trailhead it started pouring rain. My friend and I put on our rain gear and trudged up the trail. Somewhere in the first mile we inadvertently wandered off the trail. Both of us had our rain hoods pulled down and where looking mostly at our feet trying to keep the water from dripping in our eyes. Once we noticed the trail was gone I reached into my pocket to grab the trail map. No luck…the trail map was sitting on the dash of the car. While trying to prepare for the rain I forgot to put it back in my pocket. 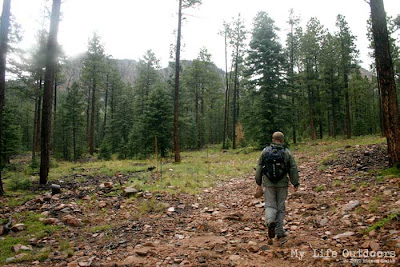 Heading up the wrong path as the rain begins to clear. I blame my friend…he was in the lead!

So there we were with no trail and no map. We looked around the area to see if we could spot the trail. About 5o yards to our left we found an old jeep road leading up the mountain. I have been on many trails that follow old jeep roads for good distances and my friend and I agreed it was at least heading in the right direction. We followed the road for about a mile when it too came to an end. Not good. We were running out of time before we had to be back and both of us wanted desperately to reach the summit. I tried to recall the map from memory and knew that the trail started to switchback up a ravine ahead. So we started to bushwhack toward the ravine. 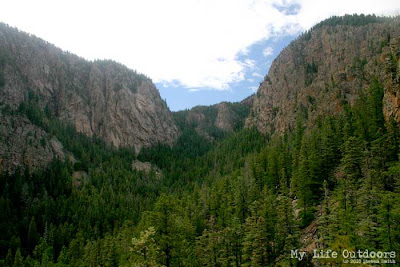 The real trail switchbacks through the trees up this ravine. Once we made it on top of the ridge we could see where we needed to be.

Once the terrain started to getting steeper we convinced ourselves the trail had gone up a gentle ledge we passed some time back on the right. High above us we could see where we thought the trail was. We decided to climb the steep slope to our right that we believed the trail was on top of. 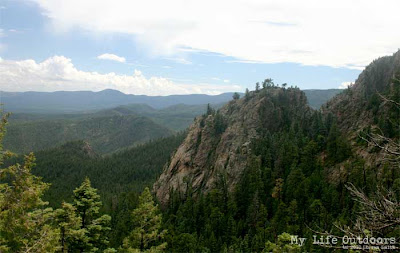 The view from our private summit about 1,000 feet below the actual summit. 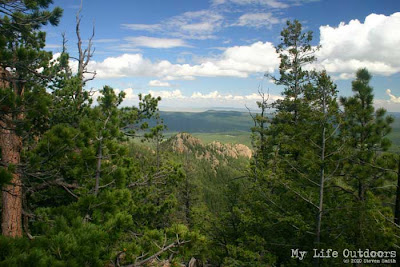 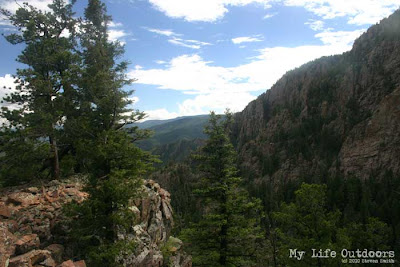 We eventually reached the top of a large ridge which opened up to gorgeous views of the surrounding foothills. There was, however, no trail and only steep vertical walls between us and the summit. We looked at our watches and knew we would have to head back if we were going to prevent people sending out search parties looking for us. We were only a thousand feet from the summit…it seemed so close…yet so far away.
We headed back down…found the jeep road and then the trail and eventually our car. Hermits had defeated us….but not for long. 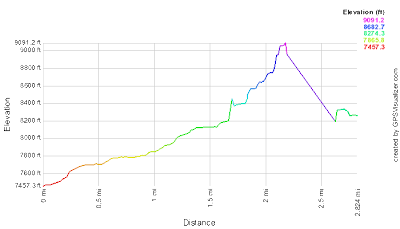 Here is our elevation chart as recorded by my phone. Its too bad I couldn’t download an adequate map while on the trail.
We reached a maximum height of 9012 feet with an elevation gain of 1634 feet over 2.3 miles. I hope to go back soon…stick to the trail and reach the top.