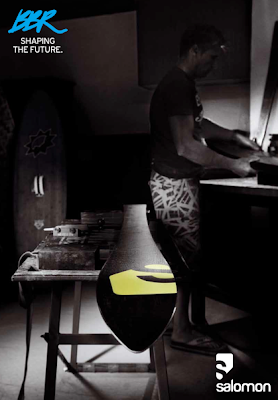 Salomon has unveiled a revolutionary ski design. The latest design from Salomon’s ski designer Bertrand Krafft, the new BBR ski is unlike any ski ever made. According to Salomon:

The patented “V” shape redefines skiing on all types of snow. An oversized tip and rocker shape enable it to float in powder and adapt to uneven terrain smoothly and predictably. With a narrow waist and pintail, a short radius and short effective edge on-piste, BBR provides great carving and outstanding edge grip on harder snow. The result is an incredibly playful ski, with great performance in any situation.

The design is said to allow the skier to do anything they want including carve, cruise, float, and play. Don’t believe it? Salomon is going to let you try it for yourself. Salomon will launch the ski with nation-wide “Shape Your Adventure” Tour, They will be bringing the BBR to ski areas around the country in the 2010 -2011 season. Hopefully this will allow skiers to get a look at the new ski and demo it themselves.


To find out when the BBR will be in your area check out Salomon’s new BBR Twitter Page. or check out their BBR facebook page.