Skip to content
March 25, 2019 Steven Smith 6 Comments
Big Bend National Park’s South Rim in the Chisos Mountains is one of the best known hikes in Texas. As a Texas native I was way overdue a visit. So on the first weekend of spring break a friend and I planned a two night backpack along the South Rim.

We woke up early Friday morning and began the four hour drive from Midland to Big Bend. Spring Break is Big Bend’s busiest time of year and backcountry campsites are awarded on a first come first serve basis. We knew the sites would fill up fast. We left Midland around 5:00 am trying to beat the spring break crowds. We arrived in the Park around 9:30 am to find about half the backcountry campsites already reserved. We put our names down for Toll Mountain and the Southwest 2 campsites. Not our first choices but better than nothing. With permit in hand we loaded up our packs headed for the trail.

The South Rim is located at the far southern end of the Chisos Mountains. A small range of mountains, The Chisos, are entirely contained within the boundary of Big Bend National Park. Rising more than 6,000 feet above the Chihuahuan Desert and the Rio Grande River, the Chisos create a sky island that supports a large diversity of vegetation and wildlife otherwise impossible in the harsh desert. The Hike to the South Rim begins near the mountains northern bowl called the Chisos Basin.

We started on the Pinnacles Trail and climbed 1643 feet out of the Basin to the saddle between Toll Mountain and Emory Peak. As we hiked views of Casa Grande, Toll Mountain, and Emory Peak kept us company. To our backs the Chisos Basin’s Window gave us glimpses to the hot desert below. Desert temperatures were set to reach the mid nineties the day we arrived. Temperatures in the Chisos Basin, however, were at a cool seventy five. Thankful for the temperature difference the mountains afforded we made it to our first campsite by lunchtime.

We took our time setting up camp and resting our feet. Before long several Mexican Blue Jay’s invaded our camp begging for food. At first we were fascinated at the birds but then began to wonder if they would become a nuisance. I was reminded of a previous Guadalupe Mountain trip along the Tejas Trail when several Deer invaded our camp and wouldn’t leave us alone. I worried the Jays would do the same, but before long they gave up and went to bother someone else.

That afternoon my friend and I bushwhacked to the top of Toll Mountain. (Click Here for Toll Mountain Post). As the sun began to set we arrived back at our campsite with just enough light left to make dinner. Temperatures began to drop quickly as the light faded. We washed out our cookset, packed all our food away in the provided Bear Box, and climbed into our sleeping bags.

We woke up with the Sun Saturday morning and packed up camp in a hurry. We wanted to be the first to summit Emory peak, the highest in the Chisos range (click here for my report on Emory Peak Summit), before continuing four miles to our second campsite. As we left Emory, views of lower Boot Canyon caught our eye. The Canyon drops over 1,000 feet in less than half a mile just below a boot shaped rock spire near the base of Emory peak. “The Boot,” for which the canyon is named, is visible for some time along the trail as it climbs south toward the Rim.

We continued along the Boot Canyon Trail until we ran into several Carmen Whitetail Deer. Following the deer into the woods we discovered a shaded picnic table behind Boot Cabin. Boot Cabin is used by park staff for shelter, equipment storage, and as a staging point for trail crews, fire crews, search and rescue, and backcountry patrols. The picnic table provided a perfect place to eat lunch and rest before continuing on to the South Rim. Just past the cabin is Boot spring and the intermittent Boot Creek. As expected neither creek nor the spring was flowing. A fact that became increasing evident by the water weighing down our packs.

As we climbed up out of Boot Canyon we finally reached the South Rim. Before us lay 180 degree panoramic views of the desert extending far into Mexico. Santa Elena Canyon was visible to the southwest and gave a clue as to where we should look to mark our nation’s border. Here and there we caught glimpses of the Rio Grande some 5400 feet below us. We lingered for awhile as we slowly soaked in the views. 1.5 miles later we arrived at our second night’s campsite.

After setting up camp we packed up our dinner and headed a few hundred yards west toward the Southwest Rim. We bushwhacked to the top of point 7395 were we ate dinner and waited for the sunset. The setting sun painted rich oranges along Blue Creek Canyon. Before long Emory peak was rich with color too. To the north west we could see Laguna Meadows and a few hikers along the Blue Creek Trail. We stayed until the sun was gone before heading back to camp by the light of my headlamp.

The morning of our last day we took a little extra time packing up camp and eating breakfast. We hit the trail about 10:00 am. Within a short half mile we caught our last glimpses of Blue Creek Canyon before rounding the corner toward Laguna Meadows. Before long we could see Casa Grande and The Window again, two welcomed sights. We descended 1,898 feet to the Chisos Basin where our car waited for us.

As promised the South Rim was a trip of a lifetime and no matter how long we spent there the views never got old. We got in the car and drove some 20-30 miles before reaching the parks northern border. We left the park wondering when we would be able to make it back again. 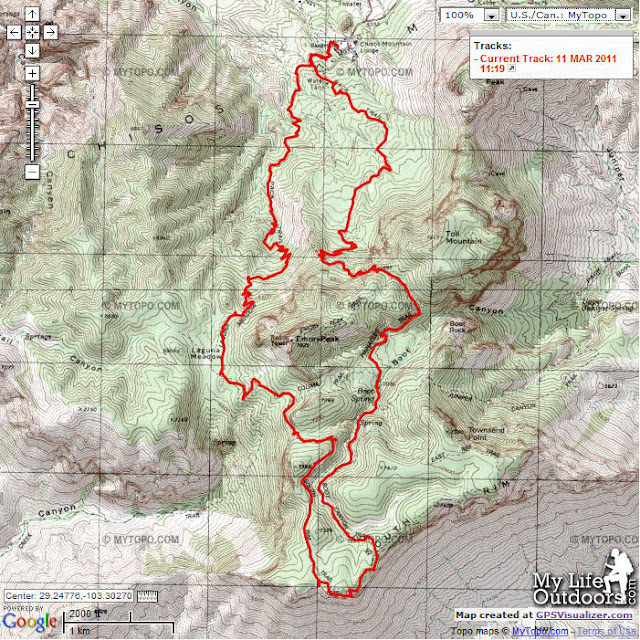 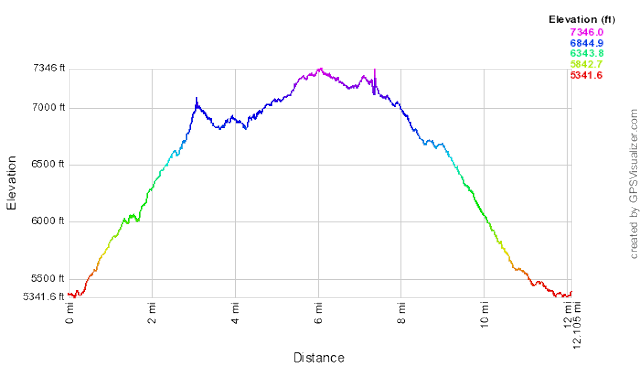