I’m sitting in the middle of Downtown Denver on the corner of two busy streets. The teenagers with me are taking turns panhandling. This is part of an experiment called Urban Plunge. You see we wanted the teens to know what its like to beg for their food, their money, and their livelihood. But begging for money is illegal in Denver. So instead we are begging for smiles. 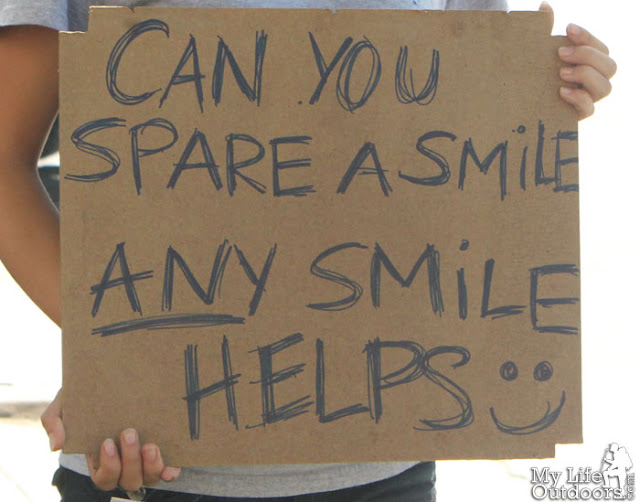 Our assignment was to create a sign that said “Can you spare a smile, any smile helps.” and then pick a location where we would “fly our sign.” Each teen had 15 min and each smile was worth $.25. You had to keep track of your own smiles and see who got the most…the catch was you couldn’t smile first…you could only return smiles given to you.

What we didn’t know is we were in someone else’s territory. A gentleman named Spike walks up and sees us sitting there and sees one of our teens across the street flying our sign. He doesn’t quite know what to think….we don’t look like the types that he usually sees flying signs. He says…in a somewhat drunken slur…”What are you kids doing here.” The next 10 min were a gift from God.

Spike sits with us and tells us he isn’t homeless…He’s living in government housing that some firemen arranged for him… He can’t stand it… sitting there all alone staring at the walls….so everyday he comes back to the streets to fly his sign. He misses the streets. They have been his life. They are all he knows. They have gotten him in trouble and he regrets the things that he has done. He cries and tells us about a life of sin. And when he cries…he makes us cry…he laughs and when he does he makes us laugh…he prays over us…and as he does we pray…”Lord thank you for sending Spike to us today”.

Spike is going through a season in his life. He has endured many hard things and now finds himself…an old, lonely, alcohol addicted child of God…struggling to live a civilized life. But even in the midst of all this uncertainty…Spike is thankful for moments like these…Moments when you meet a group of middle class teenagers from Texas that make your day.

You see earlier that week we were deep in the middle of the Arapaho National Forest at high altitude. The teens we had brought with us were loaded down…many of them with 50 or more pounds on their backs. None of them had never backpacked before. Our plan was to spend three nights backpacking, and one day climbing the summit of 13,600 foot Mount Bard. 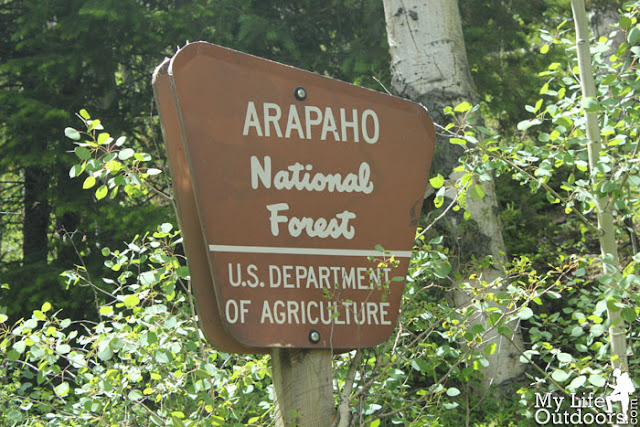 The first day was the easiest…we were only going about a mile…but the teens didn’t know that, and as they strapped on their heavy packs many were thinking…”what have I gotten myself into?”

It didn’t take long to get to camp and as we arrived I could feel a since of relief among the group. Everyone wanted to rest and get their packs off….but there was no time for rest…a thunderstorm had just come in and we had to cover our packs and get the tents up in a hurry.

Everyone was rushing to get the tents up and in the confusion…one group took the rain fly from my tent…without me knowing it. Franticly I looked around trying to figure out what I did with my rain fly. I know I packed it and I know it was here somewhere. But it was too late…by this point it has started to pour rain. Our tent is getting soaked…we are getting soaked…and since I’m looking for our rainfly…my pack is open and is also getting soaked.

I never did find the rainfly….and it was too late anyway…the tent was also soaked. We decided to wait until it stoped raining…But it doesn’t stop raining…We strung some tarps between some trees and huddled underneath them to stay warm…It rained harder and harder and harder…small streams of water began to form underneath us. then large rivers began to form underneath us. Our guide who has been leading groups out here for years…says “I’v never seen it rain this much.” That night we go to bed wet and cold.

The next day we tear down camp and pack it all back in our packs…everything is soaking wet which adds several pounds to our already heavy packs. We head off toward high camp which is just below tree line at 11,000 feet. As we hike water is running down the trails. In many places there is nowhere to step but in the water….I have GoreTex boots…many of the teens do not.

The next morning is summit day. We wake up at 4:00 am and eat breakfast on the trail. A rule has been set…we either all make to the summit…or we all don’t…no one goes back alone…and no one gets left behind. If one person gives up…we all give up.

As we climb water is everywhere…our boots are wet…its early…The mountain is getting steeper and the oxygen is getting thiner. Its a hard hike…but I know there is a pay off in the end. As we finally push above tree line…the view of the mountain is spectacular. For some…this is proof that the effort is worth it. Others are not so sure and the view of the mountain only confirms to them that this isn’t going to end anytime soon.

We continue to climb and it quickly becomes evident that the higher we get…the harder it gets. For some of the teens…this isn’t worth it. They have already come a long way…they have already seen amazing views…they see no reason to continue…some lose inward motivation…the journey is just too hard and so they are content to just go back to high camp.

The teens are faced with a choice. The decision has already been made…if one person goes back…we all go back. Some of us still want to make it to the summit…others have no motivation to continue. The teens have to decide…do I continue so that others may benefit. Do I sacrifice my comfort, my energy, my well being so that others may go on?

With a little encouragement we all make it to the summit. The views are amazing and the pay off was worth the effort. For many of the young people with us that day it was the hardest thing they had ever done. It was a hard hike, but it was more then just a hike. It was a metaphor for life.

Over the next three days we would spend time in downtown Denver working with homeless street kids. As we got to know them and the things they have been through…we began to realize a truth about life. Just like our hike…sometimes life is hard, sometimes you struggle to continue, and sometimes you want to turn back.

But every once in a while you get the opportunity to stop and rest. To sit down on some lonely bolder and rest your weary feet as you look back on the progress you made, to look back on the things you have endured, and see, in hindsight, how you are a better person for it. This is true about hiking, and it is true about life.

I thought about that and I asked myself…why do we hike? Because it is easy? Or because it is hard? Or is it neither? Maybe we hike because the journey is worth the effort. Because we grow stronger during the process. And at the end there is a summit, with views unlike anything we have ever seen. And more then that… a sense of accomplishment that has no comparison.

It is the same for life. Sometimes its hard, but in the end…its worth it.