Skip to content
November 13, 2012 Steven Smith 1 Comment
Its getting cold and snow is beginning to cover the trails. Most casual hikers have stored their boots away for warmer seasons. But a few diehards will continue to hike the trails regardless of their condition. If you find yourself in this latter group you know the importance of good traction on icy and snowy trails.v The options are endless. It seems like everyone has some form of light crampon available for winter hikes. Hillsound, however, is a company that stands out from the rest. Specializing in non technical crampons they have a solution for nearly every application.

Last spring I was honored to test and review the Hillsound Trail Crampon and Trail Crampon Pro. My family and I headed out to southern New Mexico to catch the last open weekend at our nearest ski slope. Mother nature had a different plan and warm weather forced the slopes to close early. We made the best of the situation and decided to hike the nearby trails. There may not have been enough snow to ski, but 5 foot drifts still covered some of the trails. It proved perfect conditions for testing out the Hillsound Trail Crampons.

As we started up the trail I pulled on the Trail Crampons. Light weight crampons held on by rubber stretched across the boot and an added velcro strap over the toe. The Stretched rubber is pretty standard for this type of crampon. What stood out for me was the hardware underneath. Unlike other light crampons I’v used, heavy duty chains connect to spike plates underneath the boot. This design prevents any rubber (the weakest link) from contacting the trail, making for some very durable crampons. There are 11 half inch points, which are are larger than most I have seen. The spikes are separated on to two metal plates, one at the back of the boot with four points, the other at the front with seven points. The front plate is hinged allowing for the natural flex of the boot without compromising traction. This design produces a light, non technical, crampon that is very durable and easy to use. 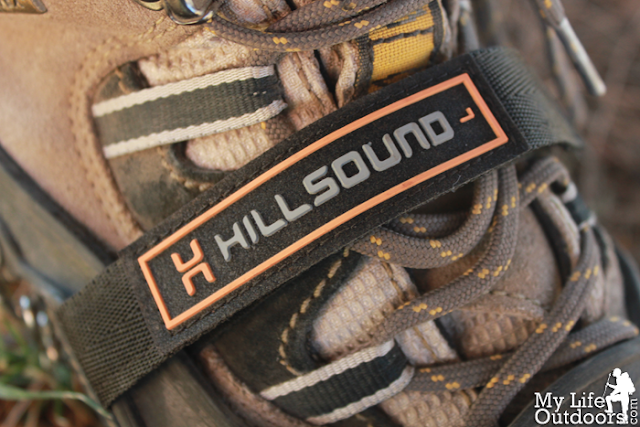 It was a warm spring day in the mountains of New Mexico. The lingering snow had spent weeks melting in the mid day sun only to freeze again at night, producing hard icy pack. As usual I had my two year old daughter with me in the kid carrier. hiking over packed ice and snow with her on my back could have been very hazardous, but the Hillsound Trail Crampons gave me confidence. I hiked steadily enjoying the early spring with my family in tow.

Higher up the mountain we began to encounter deeper and and longer banks of snow and ice. My family had a hard time continuing, so I took the opportunity to test out the Hillsound Trail Crampon Pro. The Trail Crampon Pro has the look and feel of a full technical crampon. With slightly smaller points (one inch) and intended to work with any boot (not just rigid mountaineering boots) they are reserved for non technical use. The Trail Crampon Pro are a ten point crampons that attach to the boot by two ratcheting straps that form an x over the top of the boot. This design allows a tight fit without undue pressure on sensitive areas. The straps come with four “Alpine Stoppers” that secure under the buckles to prevent the release of the straps in deep snow. The spike plates are separated front and back with a sliding adjuster allowing use with almost any boot size. Once adjusted to fit your boot the crampons can be locked down with an allen wrench screw under the heal plate. Both heal and toe plates have anti balling pads to prevent the build up of snow underfoot.

Want to win a pair Hillsound Crampons. Check back this Thursday for our Outdoor Winter Giveaway week Two. Or try to win some gear in Week One: Here.