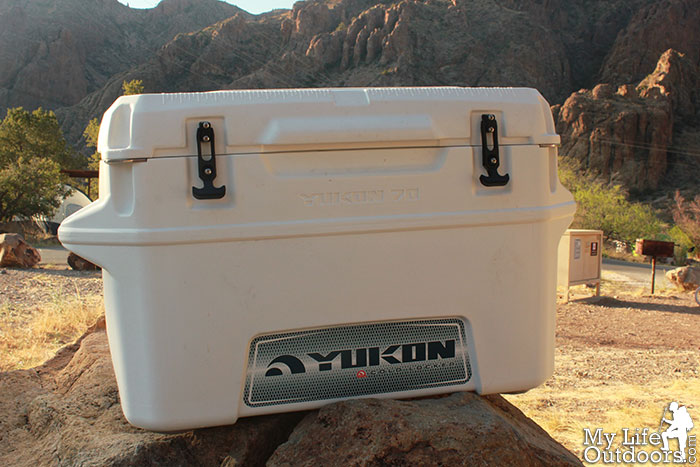 What is your favorite part about camping? The scenery? the solitude? Just being outdoors? These are all things I love about camping. But one of my favorite aspects of camping is the food. I love a good camp meal, but lets face it, good food, and solitude are rarely compatible. Freeze dried, and non-perishable foods that make it into the backcountry only taste good because you’re hungry. Car camping allows you to bring a cooler and keep delicious (yet perishable) food, but frequently need to be filled with ice to stay cool. If you want to escape deep into the backcountry, and keep food cold for several days (like my trip to Point Sublime on the North Rim of the Grand Canyon) there aren’t a whole lot of options available.

Igloo has solved that problem with their new Yukon series of coolers. Originally designed to compete against the Yeti, these coolers are tough, heavily insulated, and built to last. They advertise the smaller coolers (like the Yukon 70 I tested) will keep food and ice cold for 7 days, while the larger cooler can do the same for up to 14 days. That’s a pretty tall claim in my mind, so when Igloo approached me about testing the Yukon 70, I was curious to see how it preformed.

My family and I where planning on spending Memorial Day weekend in Big Bend National Park which would be the perfect field test for the Yukon 70. But before we ever started packing the car, I decided to do a little controlled testing. I have a small Igloo 60 quart Cube that I usually take car camping. The cube is about $350 cheaper than the Yukon, so I decided to see how they compare. I dropped 20 pounds of ice in each cooler, and waited to see how long it took it to melt. At first, the Yukon didn’t seem worth it. The ice was gone in Both coolers in about 3 and a half days.

I thought “something must be wrong”, so I began reading the little instruction book that came with the Yukon. It has several tips for getting the most out of your cooler. One of those tips was to pre-cool the inside of the cooler. If you don’t, the ice has to overcome heat trapped in the insulation. It recommends leaving the cooler open inside the AC overnight before use. I decided to retest and leave both coolers open overnight in the house. I then put 20 more pounds of ice in each cooler and waited to see when the ice would melt. Not much better. The AC tip may have given the Yukon an extra day (4.5 instead of 3.5 days) before the ice melted. But the Igloo Cube performed about the same. It seemed the Yukon did better, but not worth the price.

I still must be doing something wrong. I decided to just try and replicate their 7 day claim. I did some more reading, and discovered the 7 days is based on .9 pounds of ice per quart of cooler capacity. Igloo then measured from when the ice was placed in the cooler until the inside temperature reached above 40 degree fahrenheit. So I bought 80 pounds of ice, put 40 pounds in the both the Yukon and the Igloo Cube and threw in some thermometers I had. The Yukon performed much better. With the extra ice, and opening the cooler only once per day, it was 6 and a half days before the water temperature reached 40 degrees. The Igloo cube was done in 4.5 days. It seemed the Yukon was at least close to Igloos claims.

Now it was time for a real field test. We loaded up the Yukon for a 4 day camping trip in the Chisos Mountains of Big Bend National Park. With the cooler loaded full of food and drinks we could only fit one 20 pound bag of ice. We used it like we would any other cooler opening and closing the lid as we needed. The ice seemed to hold up pretty well. During the 4 days we were camping we only added ice once, and I’m not even sure it was really needed. Some friends had a standard cooler in their car and had to add ice everyday (sometimes twice a day).The Yukon seemed to really perform. Had we been deep in the backcountry, the Yukon would have saved the food. If I would have followed some of the other tips, like using block ice, dry ice, etc. I’m sure we could have gotten to Yukon to last even longer.

All that being said, there are a couple of big cons to the Yukon. For one, the price. Right now the Yukon 70 retails for about $400 US. That is a lot of money to pay for any cooler. The other detractor is the weight. Even empty the Yukon feels like a fully loaded cooler (about 40 pounds), fill it up with Ice and food, and you cant pick it up by yourself. My Igloo cube has wheels that allow it to roll. Seems like igloo could add some nice beefy wheels as an accessory for the Yukon series.

Apart from those two detractors, the Yukon has some nice features. 2 inches of Insulation (3 inches in the lid) Beefy stainless steel hinges, large drain hole, freezer gasket lid, sturdy 2 hand handles, and skid or non skid interchangeable feet to name a few. It is a really nice cooler for the money. I have no experience with its competitors, but my money is on the Yukon. You will have to decide if it is worth the price.