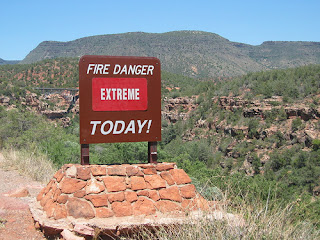 A fire has started in the Guadalupe Mountains north of Guadalupe Mountains National Park. The fire began in the steep, rocky and inaccessible terrain of the Guadalupe district: Lincoln National Forest and has spread across 10,000 acres into Bureau of Land Management and private lands. The “Last Chance fire” is so named because it started near the Last Chance trail. I was in this area just a few weeks ago visiting Sitting Bull Falls.

The cause of the fire is not yet known and is under investigation. Firefighters were working to keep the fire from spreading farther north and east, winds up to 55 mph are making it difficult. The fire was 0% contained as of 8:00 am this morning.

The Forest Service also reported smoke from the fire was affecting the Carlsbad area and urged anyone with relevant health or respiratory issues to take precautions.

The Lincoln National Forest is also battling the White Fire

Other Fires burn outside Ruidoso NM, as well as all across Texas.