We decided we would head out for a day trip and see the falls. The Family and I woke up early and drove northwest toward Carlsbad NM. As we approached the Desert Mountains I was excited to see the National Forest come into view. As we entered the Lincoln National forest I wondered “where are all the trees?” On the Texas side of the Guadalupe Mountains the high altitudes create a sky island that supports a dense forest of pine, oaks, and maples. I expected the same along this stretch of the range, but as you head further north the trees all seems to fade away. The Guadalupe District, unlike the Sacramento and Smokey Bear districts, is hardly a forest. At least when describing the area around sitting bull falls.

I pushed this out of my mind and unloaded the family at the picnic area. It was barely 9:00 am when we took the short paved trail to the base of the falls. Sitting Bull spring, which feeds the falls, is a strong spring. This area has suffered extreme drought with no measurable rain fall for the last 6 months. Even with so little rain, the falls were still flowing. We played around below the falls until it was time for lunch. After which we followed Trail 68 to Sitting Bull Spring.

Following the trail you climb 130 feet to the top of the falls. There you are greeted by two beautiful and deep pools of near freezing water. We stopped only for a moment before continuing along the trail. Before long we had reached a fence with an s-gate. The ranger told us about a small grotto just off trail near the gate. We went to investigate. Heading down hill from the s-gate we soon found the small grotto. We stopped to sit in the cool shade before continuing on to the spring.

Not even 100 yards past the grotto we came to the spring. It was difficult to tell the exact source due to thick riparian vegetation along the creek. We stopped in the shade of the creek-side trees and dipped our feet in the cool water.

All in all the hike is a short enjoyable hike along a rare desert stream. The main draw is the falls at the beginning of the trail and most people will spend their time there. This is a very popular area and will be crowded on most weekends. If you wish to swim or wade, I recommend climbing above the falls to the two small pools. It is more likely you will have this area to yourself…but no guarantees. The further upstream you hike the less people you will see. 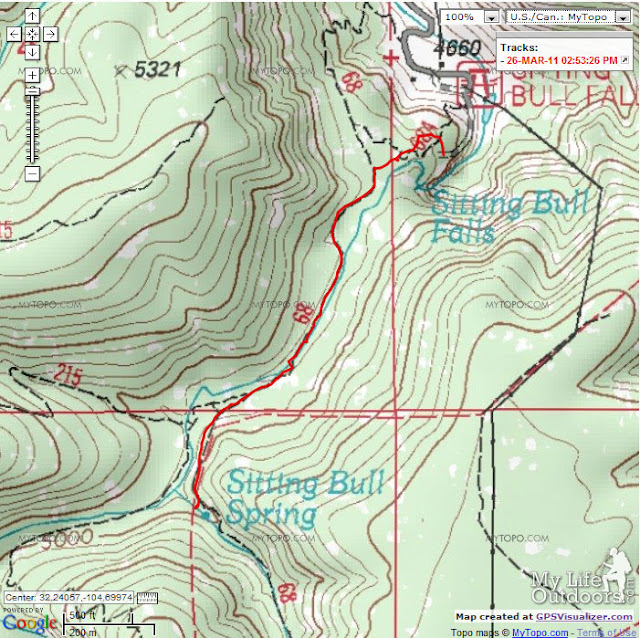 High Quality Map of the Lincoln National Forest Guadalupe District including Sitting Bull Falls. Buy it through the link below and help support MyLifeOutdoors.