The name says it all: Grand View Point. My family and I were looking for a short easy hike that could get us away from the crowds of Grand Tetons National Park. And that is just what we found tucked away at the end of a short dirt road just off the main highway. Anybody following us would have thought we made a wrong turn down a road closed to the public. At least thats what we were hoping as we pulled up to the trail head and found only one other car. With any luck we wouldn’t see another soul.

And we were pretty lucky. The owners of the one other car passed us just as we set foot on the trail. They had already been up and were headed back to their car. We talked for a bit before continuing on. We were in no hurry. We had all day to hike the short 1.1 mile trail. 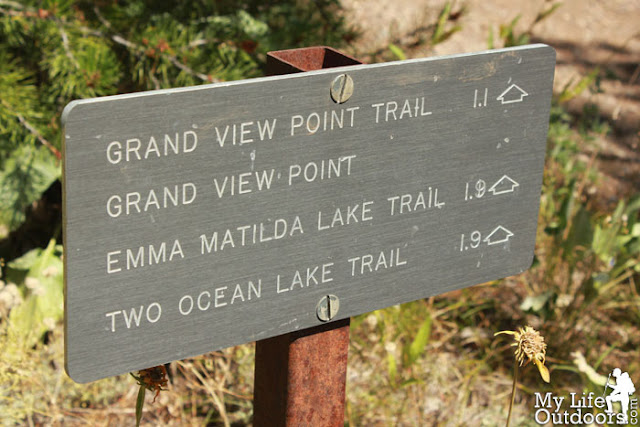 For a short trail, however, it gains a lot of altitude. I had my 2 year old on my back with my wife and 10 year old in tow. It didn’t take long before we were all a bit winded. “I thought you said this would be an easy hike” my wife said. She was nursing a injured tow from our 5 day backpack through Glacier the week before. The pain was forcing her to hike in sandals and the steep incline of Grand View Trail wasn’t making it any better. “We will be there before you know it.” I said. And we were. Moments later we started to catch Grand Views between the trees. First of the Tetons to the West. Then of some meadows and lakes to the East. And before we knew it we had reached what felt like the summit of this short trail.

I took off the child carrier and let our littlest one stretch her legs. Looking West you could see the entire Teton range in full panoramic view. Jackson lake sprawled out before their feet with large islands in full view. To the East small natural lakes surrounded by forest beckoned me to more hiking and exploring. This was indeed a Grand View. My family and I sat up their for the better part of an hour. Breathing in the fresh mountain air and taking in the country side. It was a good moment, with a view that never changed but was better then any TV show.

As we were getting ready to leave I saw that the trail continued north. I thought we had reached the top, but Grand View Point was actually about another 10th of a mile down the trail. A sign marked the true summit and as it turns out the real Grand View Point didn’t have as Grand Views as where before. Trees completely blocked the view of the Tetons to the West. The best views, with practically a 360 field of view lay back down the trail a little ways.

Having accomplished what we set out to do my family and I headed back down the short 1.1 mile trail back to our car. We never saw another soul the rest of the time we were there, which made this trail quite a gem in an otherwise crowded park. Short, not too hard, with plenty of solitude. This hike was one of our favorites of all time.

Getting There:
The road can be hard to find as there is no signs or other markers to distinguish it. Just a small dirt road off the main hwy. Head North 0.9 miles from the Jackson Lake Lodge. (see map below). Once you are on the dirt road stay left at both of the forks and follow the road until it dead ends at the trail head. High Clearance vehicles are recommended.