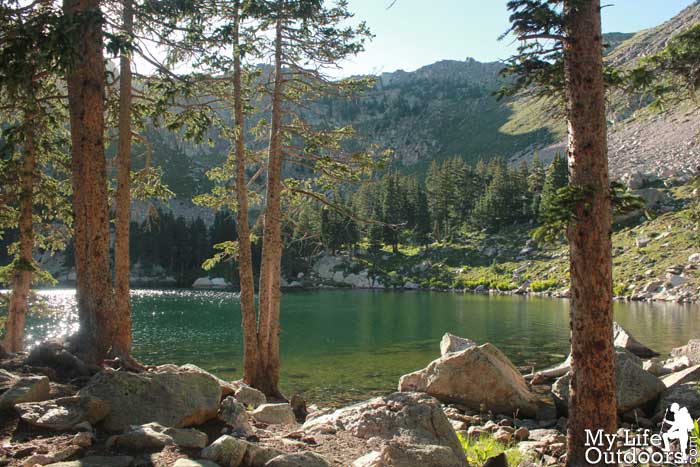 March 28, 2019 Steven Smith 23 Comments
This is part two of our 4 day hike in the Pecos Wilderness – New Mexico. Read Part One – Hiking to Lake Johnson.

My heart is pounding, my feet ache, and I’m starting to doubt there is a lake up here at all. We feel like we have been hiking all day and the constant incline of the trail seems as if it will never let up. But just as we begin to think we should camp for the night…Lake Katharine comes into view, and she is amazing.

That morning we broke camp and left Lake Johnson behind. During the hike we would descend nearly 900 feet only to go back up another 1500 feet. It would be a tough but rewarding day as we would see two more Sub Alpine lakes. Lake Stewart and Lake Katharine.

We started down Skyline Trail (#251) toward Lake Stewart. Going down always seems easy and we traveled the 3 miles in no time arriving at the lake by mid morning. We had some friends who hiked in with us the day before but didn’t feel up to the climb that was Lake Johnson’s. Instead the pushed ahead to Lake Stewart and had spent the night there. We stopped for awhile and visited with them as they fished in low alpine lake.

Looking out across Lake Stewart we could see Santa Fe Baldy and the small bowl that hid Lake Katharine. Thats were we would be spending the night tonight. She was calling us, so we said goodbye to our friends and continued down trail 251 to the Winsor Trail Junction. Throughout most of this section the trail is relatively flat between the Winsor and the Lake Johnson Junction.

At the Winsor Junction Trial 251 turns west and begins the steep climb up to Lake Katharine. In a little less than a mile the trail climbs most of the 1500 foot rise. We started off strong excited about the promised beauty of Lake Katharine. As we arrived at the next Junction we began to worry. The Forrest Service map was not lining up with what we were seeing on the GPS. We were tuckered out after climbing up a steep trail only to worry it was the wrong way. The trail we were on was not on any maps except my GPS. We discussed going back and looking for the trail on the Forest Service Map. No one wanted to loose elevation we had already gained. So we decided to carry on down the mystery trail. If my GPS was right it would eventually lead us to Lake Katharine.

As it turns out the Forest Service changed the trails but never changed the map. The only way to know the difference was by GPS or really good orienteering skills. When we left Lake Katharine later that week we decided to try the old trail. It was a mistake. The forest service abandoned it long ago evidenced by the massive number of downed trees. If you head to lake Katharine follow the signs for Trail 251, you will save your self a lot of effort.

As we began to near the lake basin fatigue had really set in. The climb had completely worn us out and we were beginning to wonder if we would ever get there. Just before the Lake a small pond appears on the right side of the trail. The pond seemed so inviting and required no more climbing. We thought about just camping there so we wouldn’t have to keep going. Later we discovered there was a couple camped by the pond. They thought it was lake Katharine and set up camp on the shore. We told them they were in for a surprise. Just around the corner was the real lake Katharine. One of the prettiest sub-alpine lakes I have ever had the pleasure of viewing.

When we finally arrived at Katharine we were so tired we unstrapped the packs and set up camp in the first level spot we could find. After we rested a short bit we hiked around the back side of the lake. We should have kept going. The best campsites were around to the west end of the lake.

We spent the afternoon taking in the beauty of the lake. We were the only ones there (for now) and we were enjoying nature at her best. The next day we would summit Santa Fe Baldy and see a whole new side of Katharine But that is another story for another time.