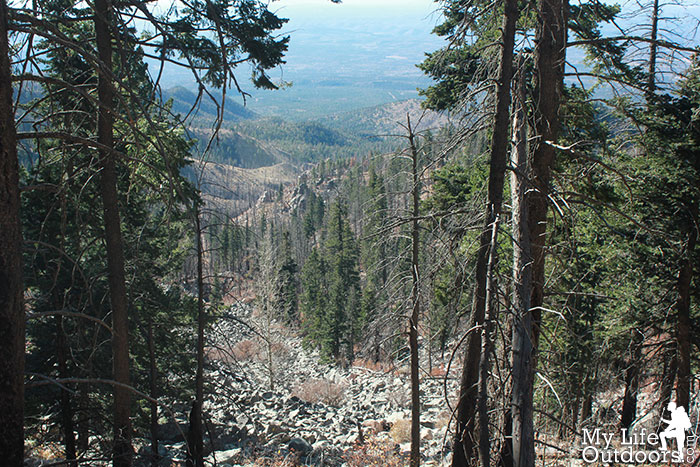 Sometimes I think we forget why we call it a Wilderness. The land is wild. In some of the more frequented wilderness’ in america the land can seem tame. This is not the case with the Capitan Wilderness of the Lincoln National Forest in New Mexico. This small little wilderness situated just north of Ruidoso NM has almost been forgotten if not abandoned by the forest service. Which makes this wilderness quite a bit more wild than others I have hiked in.

A good friend wanted to take a trip, and I hardly like to go to the same place twice. The small Captain wilderness has always intrigued me so I planned a two night trip up to Capitan Ridge and back.

We set off late in November heading up the Pierce Canyon Trail (T61). I was a little worried about water sources since most of the southwest is still suffering from a terrible drought. But my fear was misguided, before long we heard the wonderful sound of trickling water coming down the canyon. We stopped to fill up and eat a little lunch before heading up to the ridge. This was just the first leg of a large loop we had planned. Little did we know, the Wilderness had other plans.

Just past our lunch stop the forest opened into a huge burned out area from a fire not long ago. The trail crosses the stream, switchbacks once up the canyon, and continues along the east facing slope of Pierce Canyon. We, however, didn’t go that way. Where we ate lunch must be where most people turn around, because it was the last time we were certain of the trail. From there on to the ridge the trail is very faint and even misleading. My friend and I continued along the canyon bottom looking for signs (any signs) of a trail. It wasn’t until heading out that we finally found the original trail and could see how far off we were on our trip up.

Haveing lost the trail we encountered numerous downed trees and large boulders making the hike slow going. We eventually found a rock cairn on the western facing slope of the Canyon. When or where the trail switches to the other side…I still don’t know. We managed to stay on the trail for awhile thanks to a few well placed rock cairns. As we neared the top we lost sight of the trail again. I decided to pull out my GPS and see if it could help us. It was no use, even when the gps said we were dead on, we could find no sign of the trail. No problem, we knew we eventually wanted to camp on the upper ridge, so we planned to continue to climb until we ran out of mountain. 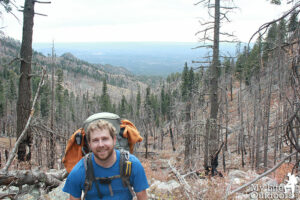 The actual trail does some funny things here. It wasn’t until coming down that I was able to determine its actual path (or at least most of it) It does not do what is shown on the map or GPS. According to my Guide Book for the Lincoln National Forest, the area is so little used that the forest service only comes out once every two years to clear downed trees. As I said before, it seems the forest service has completely abandoned the area. When we could find the trail, downed trees (probably made worse by the recent fire) made the trail almost impassible in places. It was truly a wild place.

We eventually made it to the ridge and set up camp right on top. We had originally planned to summit Capitan Peak, but the state of the trails made any progress almost impossible. Instead we enjoyed a quite dinner by the camp fire with amazing views. 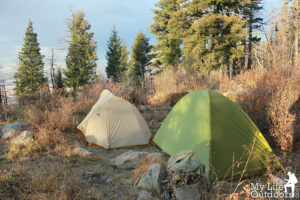 By morning we were running low on water. Not wanting to risk dried up water sources, nor see the state of other trails (they could have been worse). We decided to go back to last water we had seen, camp one more night down low and head out in the morning. Going down we were able to find the trail where it had lost us in our journey up. But even then it was elusive. There is one large cairn next to an old burnt out tree stump that marks a huge switchback in the trail. This rather large switchback is not indicated on the map, or GPS. Look for the Carin in the picture below (it is easy to miss) and head southwest up to the ridge before turning back north. You will save yourself a lot of trouble.

We made it back to our original lunch spot from the day before and began looking for a campsite. My friend was having a little trouble with one of his hips and began to think he should head out. We were just a couple of miles from the car and decided we could eat hamburgers in town if we headed out now. We skipped the second night, which was a good idea considering the state of my friends hip over the next two miles. It seems all the ducking under trees (sometimes climbing over) had really done a number on him. The wilderness had shown us she was still in charge, we where willing to let her have her reign. 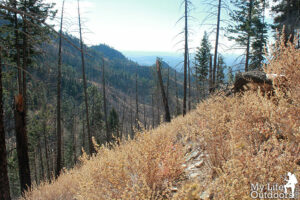 If you plan to head out in the Captain Wilderness check with the Smokey Bear District of the Lincoln National Forest. Ask them when the last time they had trail maintenance in the area. If it is at all recent, you should be good. Otherwise, you might enjoy the nearby White Mountain Wilderness a little more. It is a little less wild. 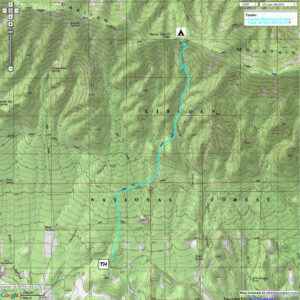 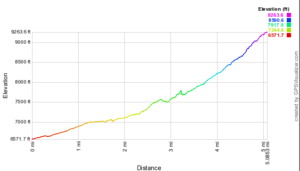