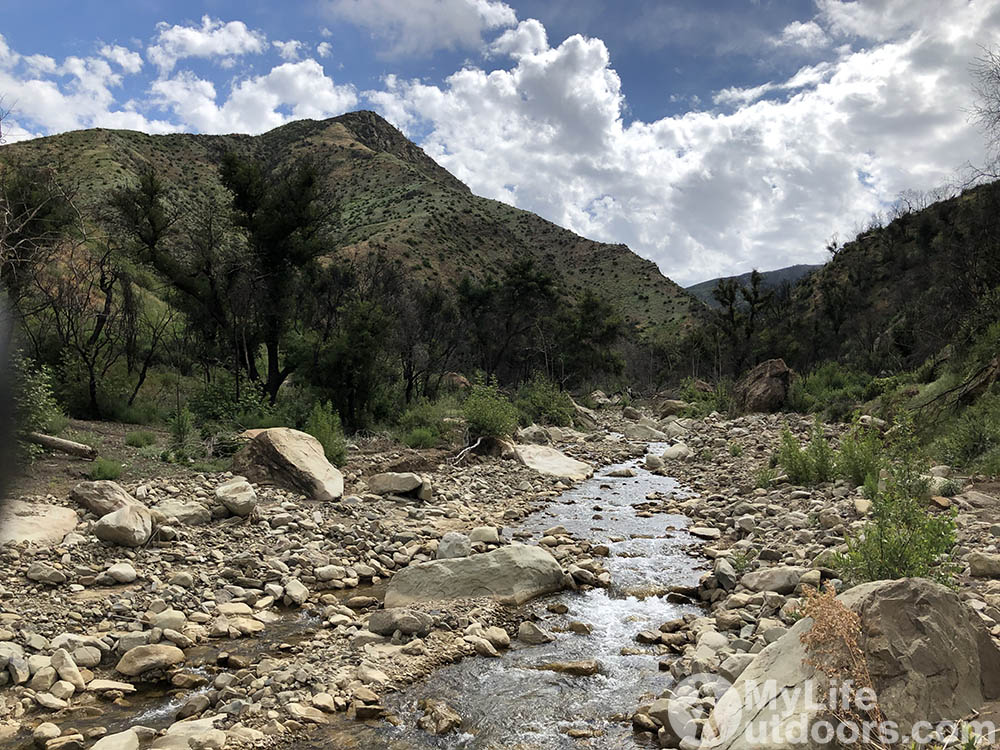 The Matilija Wilderness in Southern California is indeed a wild place.

I recently did a 2 night backpacking tip of the North Fork Matilija Creek Trail in the Matilija Wilderness of the Los Padres National Forest.

I wasn’t looking to do a lot of miles on this trip and even what I intended to do was cut short due to how difficult the trail is to follow.

Matilija Canyon was recently burned in the Thomas Fire of 2017. I knew the Los Padres had suffered some fires in years past but was unaware of how recently this area burned.

Having said that I’m not sure my difficulty with the trail was due to fire damage but rather low trail usage. There just don’t seem to be very many people using this trail.

Which was exactly what I was looking for. Solitude. And I found it. During my two days on the North Fork Matilija Creek trail I never saw another living sole.

I arrived in Southern California pretty late and didn’t get on the road till almost 5 pm. It is about a 2 hour drive from Las Angeles to the Matilija Wilderness. By the time I got to the trail head and loaded up the sun was already going down.

I got out my head lamp and started down the private road toward the trail. To get to the trail you have to cross through private property. The Los Padres National Forest has an easement but hikers must stay on The road until you reach the trail intersection.

I hiked in the dark just far enough to reach public land and find a place to camp. The next morning I crossed the North Fork Matilija Creek and headed up the trail.

The trail crosses the creek close to a dozen times in the first few miles. This section of the trail is popular with day hikers up to about Lower Matilija campsite. But even with the added traffic the trail is easy to lose in the high brush. Multiple times I ended up in a dry creek bed mistaking it for the trail. Each time I had to back track and look for discoloration in the grass to locate where the trail continues.

Several hikers have set rock cairns in areas where the trail is difficult to follow. And the forest service (or someone) has tied ribbons to help hikers follow the trail.

At about 3 miles in just before the first canyon narrows…the trail becomes pretty confusing when it dumps out into the North Fork Matilija Creek bed. There are a couple small rock cairns on river left and a ribbon a few hundred feet up stream along the bank. As anyone would do I followed the ribbon and the creek bed as it funneled me to the canyon narrows. Travel through the narrows is particularly difficult with the canyon walls closing in on the creek. I couldn’t help but think I’d lost the trail again.

Far above the creek on river right I could see something that looked like it could be the trail but couldn’t be sure and couldn’t reach it anyway. My only choice was to continue the difficult hiking along the creek bed. The next day I found out the trail does climb up above the narrows on river right but is badly eroded where it crosses the River. The FS ribbon actually leafs you away from the trail into the narrows. I attempted to set rock cairns to show future hikers where to cross and find the trail and even considers removing the lone misleading ribbon. I set the cairns but left the ribbon not knowing if the forest Service was planning to change the trail path. Either way if you can find where the trail climbs up above the first narrows it makes for much easier and faster hiking.

Just past the first narrows I managed to rejoin the trail near Middle Matilija campsite. And even stumbled upon an alternate established site on the left side of the creek. Ultimately this is where I spent the night. But not before pushing on to Middle Matilija falls.

Between Middle Matilija campsite and Middle Matilija falls the trail is increasingly difficult to follow. Several ribbons attempt to lead the way but fail in multiple areas.

The ribbons should be tied so that you can see the next ribbon standing at the last ribbon you pass. And sometimes this works out. Other times I lost the ribbons completely. Even when I could follow the ribbons I felt like I was bushwhacking through high brush and down trees.

Hiking became so difficult I decided not to push beyond Middle Matilija falls. Instead I ate a late lunch near the falls and headed back to the established site just down stream from Middle Matilija campsite.

Middle Matilija falls is a tad disappointing. Not much more than a trickle falling 60 feet or so into the canyon.

Back at camp I spent the rest of the night by the fire enjoying the solitude of the Matilija Wilderness. The next morning I packed up and hiked out hoping my car was in one piece.

At the trail head there is a sign that warns about car break ins. Stating any valuables “will not be there” when you get back. As I sat by the fire the night before I checked off a mental inventory of what was left in the car. As far as I could recall all my valuables (cellphone, wallet, camera) were with me. Then I realized my laptop (with my entire life on it) was in the car. I had a little anxiety wondering if vandals were making off with my computer as I slept. But when I arrived back at the trailhead everything was intact.

Ultimately I throughly enjoyed my trip up the North Fork Matilija Creek. As I mentioned before I found plenty of solitude. I don’t know if this was due to low traffic on this trail, the fact that I was hiking in the middle of the week, or the recent fire. But for me it didn’t much matter. I was happy to have it to my self.