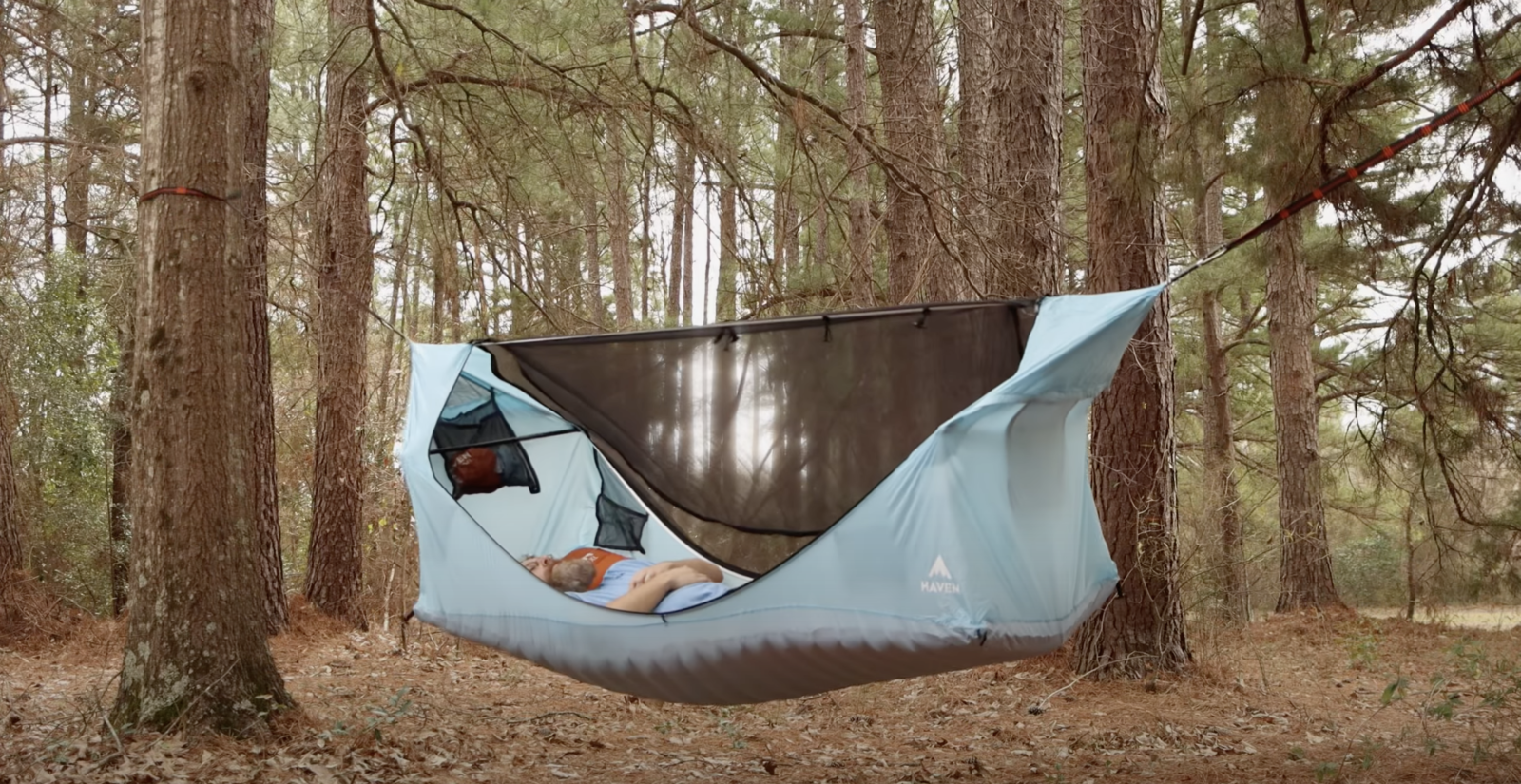 I really wanted to like this thing! Its one of the only true lay-flat hammocks in existence. A hammock that even side and stomach sleepers can use. But to be honest, it seems like more like a gimmick than anything else.

A little while back I was sent this Haven tent to try out. And I was intrigued because I’ve never been a big fan of hammocks, mainly because I’m a side sleeper, and hammocks just aren’t good for side sleepers.

But Haven tents are different. They are more like a suspended tent than a hammock. So I wanted to try it for myself to see what it’s like. After spending some time with it, I think I’ve decided that it’s a cool idea, but in a real-world scenario, it’s just impractical.

Right off the bat, the biggest problem with the Haven tent is the weight. This thing weighs in at over eight pounds for a one-person shelter.

Eight pounds. Now that includes the air mattress, which most shelters wouldn’t. But even then, I have four-person backpacking tents that don’t weigh that much. Without the air mattress, this thing is still five pounds alone. And you can’t even change the air mattress for something different because the design is dependent on this specific air mattress.

The only time I would consider this would be on a short, overnight trip with low miles. Anything longer than that, and the weight is just impractical to carry.

If you can get past the weight, the Haven tent just feels small on the inside. I even got the extra large size, which at first I didn’t think I needed. But to be honest, I can’t imagine it being smaller than this. Imagine a tent that is only as wide as your sleeping pad and that’s basically a Haven tent.

The extra large is 30 inches wide, which seems like it ought to be enough room, and there are cool options you can do, like suspending your pack or other gear from the ridge line to keep it out of the way. I think I could get past it if this was a minimalist shelter. You make sacrifices for benefits in weight, etc., but if I’m carrying this much weight, it better have more to offer than just being suspended in the air.

One of the things that I think adds to the small feeling is the fact that the air mattress bows in the middle when you lie on it. It’s not quite rigid enough to support your weight without folding in on you a bit.

Now this certainly isn’t as bad as an actual hammock, and it is possible to sleep on your side and even your stomach of you want, but it certainly makes it feel a little more cramped on the inside. This is going to be worse on the extra-large size than it is on the regular because your weight isn’t spread out as much. Larger hikers will experience less folding in the extra-large size and smaller hikers will experience it less on the regular size. But needless to say, the more of the hammock you take up, the smaller it’s going to feel.

Haven tents are a little finicky to set up. You have to set the head slightly higher than the feet, or once you lie down in, it your head will be downhill.

You have to make sure your hips are centered or you will once again find your head too low. As you’re getting in and out of it, or just trying to move around inside, the mattress had a tendency to shift to the left or right and was very difficult to reposition without getting out of the hammock.

Once again, these are all things I would be willing to compromise on if there was a really strong benefit to be gained. But as far as I can tell, the only benefit is the fact that you are suspended off the ground. Which, if I’m being honest, just feels a little gimmicky.

There is only one very specific scenario where I might consider taking this: If I wasn’t going very far and I knew I wasn’t going to have flat ground at my campsite … which just isn’t very realistic. You’re most likely to find an uneven campsite off trail, which if you are going off trail, then you are probably going to want to go quickly and lightly. And if you are staying on trail on a short, overnight just a few miles from the trailhead, that’s the area where you are more likely to find well-established and flat campsites.

It’s not all bad. Haven tents are well made with quality materials.

It’s relatively affordable at $315 for the regular and only $335 for the extra large, which for a high-quality shelter, that’s not too bad. There are certainly larger, lighter and cheaper shelters out there, but at least you’re not paying $400–$500 for this thing.

It does offer some versitility in the fact that you can set it up on the ground with a couple of trekking poles if you want. But once again, there are much better trekking pole options on the market.

I could see this working okay for a car-camping situation where you don’t care about weight as much. But even then, it seems like you would be bringing it just because it’s cool to be suspended from trees, which makes this seem more gimmicky than anything else. If I were going to spend $300 on a single shelter, there are a whole lot of better options out there. And if I had lots of money to spend on multiple shelters, once again, it seems like the only reason I would buy this is because it’s different and would maybe get me some attention at the campground. Again, it seems … well, gimmicky.

If you want to watch the entire review on YouTube, you can do that right here:

I do need to let you know I was sent this shelter free of charge for review, but even so, I just don’t feel like I can recommend it. It’s not bad and it certainly won’t hurt you. The only danger I see is wasting your money.

So, those are my thoughts on the Haven Tent’s Lay Flat Hammock. What do you think? Am I off the mark or dead-on in my assessment? Let me know in the comments below.

If for some reason you do decide to buy this, please help support me and buy through the links in this post. I’ll earn a small commission at no additional cost to you.

And as always, thanks for stopping by.