As many of you know I had the opportunity to test Agion Active’s new Anti-stink technology. As a result I was entered into a contest and won a vacation to Glacier National Park. Now agion Active is being marketed in the outdoor apparel industry.

It was announced yesterday that Woolrich has partnered with Agion Active to market a new line of Woolrich Anti-stink Merino and polyester blend base layers. Jerry Rinder, Woolrich VP of Sales and Marketing said:

“While wool has the natural ability to eliminate some odors, by incorporating Agion Active into our base layers we are able to offer something that no other brand can – total confidence in knowing that no matter how hard you work or play you won’t offend those around you,”

I must admit that I am impressed with Agion Active’s ability to eliminate odors. I was sold on the technology after hiking several miles up and over huge rocks at Enchanted Rock, near fredricksberg, TX. All along the way I would periodically stop to smell my armpit. (Yes…it was very strange!). I was unsure at first…but by the end of the day…I could hardly smell myself at all. 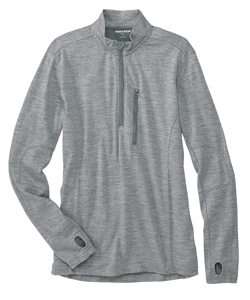 I believe incorporating this technology in a wool base layer will make an outstanding product. Woolrich will feature Active Agion in their 50/50 polyester and Merino blend men’s Territory crew and half zip shirts along with women’s Poly Merino half zip and v-neck shirts. The Woolrich/Agion Active base layers will be Fall 2011 with for about $59 to $69.

If you are interested (or just a geek) Active Agion works in two ways. Silver ion antimicrobials stop the formation of odor causing bacteria on the fabric while simultaneously trapping molecules from ambient odors. What does this mean? It means Active Agion works by eliminating odors on the product itself….but also eliminating odors around the fabric (like in your armpit). The best part…Agion Active regenerates every time you wash it which means it should continue to perform for the life of the garment.

With Woolrich’s rich history and well respected garments combined with the new Agion Active technology…these new base layers are sure to be a hit. I can’t wait to get my hands on some.